I am quite pleased with how my Desert Warrior conversions from Poundland penny soldiers (£1 for a tub or bag of 100) are shaping up so far.

Several coats of white paint were required on the kitchen roll and PVA glue or the better alternative of tissue paper and PVA.

For a penny each these 36mm plastic figures have lots of conversion potential although I have yet to try splicing one body onto another. It is quite hard plastic compared to Airfix figures.

I enjoyed adding the brass or copper strips on the long barrels on the rifles or jezails of these hill and desert warriors. 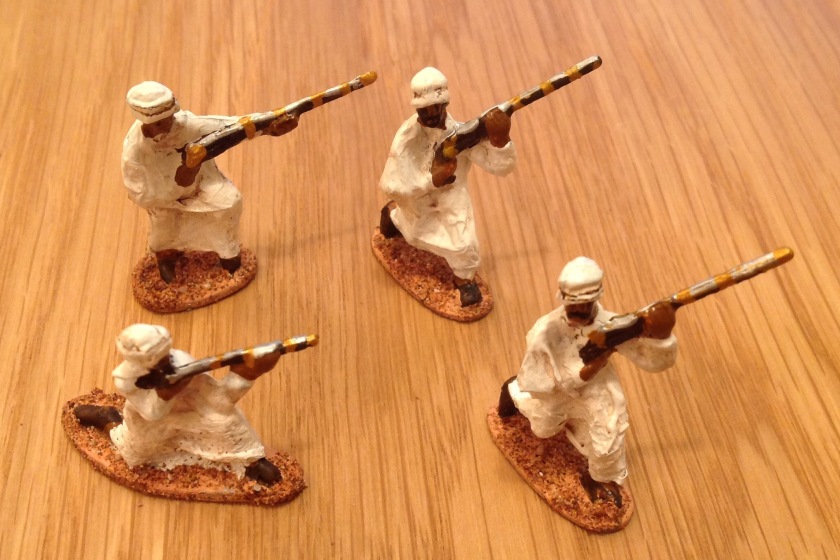 Desert or mountain rocky sandy base was in fact the base painted with flesh tint artists’ acrylic then quickly dipped in a small box of  red Devon beach sand, collected on a recent seaside trip.

I tried a very very weak or thin umber wash of acrylic to bring out the folds and shadows of the white desert robes, without losing the toy soldier look.

The warriors are not based on any one tribe – they are part Mahdist,  part Desert or Bedouin type ‘Lawrence of Arabia’ Arab Warrior and part Pathan North West Frontier hill tribe. They are destined for fighting in the distant deserts of  Farica or Generica.

Donald Featherstone was one inspiration for these figures, shown in my Man of TIN blog:

My other inspiration for these desert warriors, apart from Featherstone’s tribesmen in Solo Wargaming, was an early 1970s childhood Ladybird book, Soldiers  by John West and illustrated by Frank Humphris.

The page on tribal warriors was pretty useful – I like the surprising 1970s Ladybird equality sentiment about:

Soldiers of other lands

“Not all soldiers had regimental uniforms.

They were fighting men too.

They were just as brave.”

The long rifles of the oddly moulded or copied original pound store modern troops suggested details or conversion possibilities like a long  Jezail type musket. Their bulky head gear or helmet looked oddly like a turban or the head scarf of a late 19th Century desert or hill  tribesman.

I need to run up two of three dozen more of these conversions for a suitable skirmish encounter. Then I need to make  some suitable red or khaki Colonial infantry as opponents.

I have started work on some trial Colonial infantry figures such as this rough unfinished Redcoat engineer or signaller with a heliograph, crudely converted from a modern machine gunner. Kneeling artillery gunners are another conversion possibility for this figure.  Still some work to do on the heliograph. 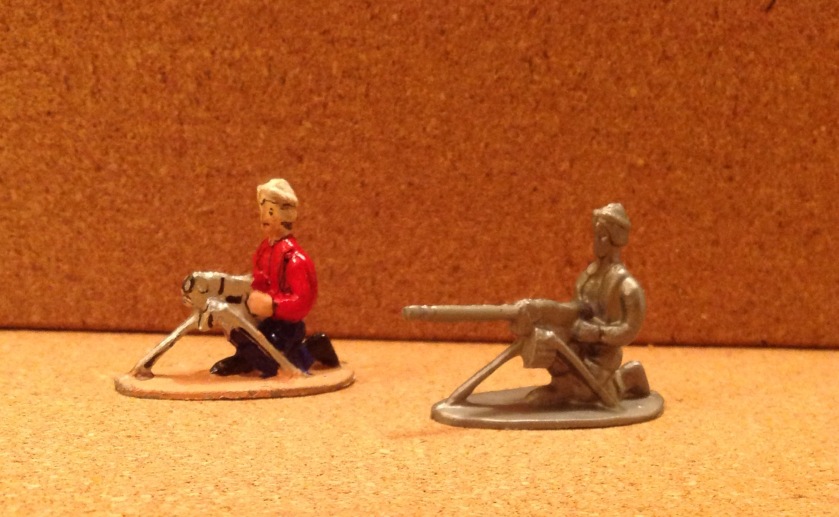 I look forward to trying some other tribesmen variations, more Pathan or more Mahdist, some more colourfully robed Airfix type Bedouin of Desert warriors, even a mysterious tribe of black cloaked Desert Warriors.

All for a penny each …

I shall come back in another blogpost to this handy little 1970s Ladybird book Soldiers and its simple clear view of history and occasional sentiments about the waste of war.

Roleplaying and wargaming for fun and employment