The excellent Small Scale World blog by Hugh Walter and other plastic figure blogs like Stad’s Stuff are interesting because they feature not only lots of plastic soldiers, clones, pirates and novelties, but also show attractive ephemera such as the artwork and packaging.
In the spirit of this, I have photographed the Battle Squadron labels of these “tub o’soldiers” as my Poundland receipts described them.

The Poundland Battle Squadron figures (produced or imported by Funtastic) are shown on a interesting sandtable background with some typical poundstore figure set accessories that are sadly not included in the tub.

These accessories include  battle-torn wooden signs, a tank and / or helicopter, barbed wire and walls, which not being included could be  potentially annoying or confusing to purchasers.

Obviously you need to raid your own toybox and sandpit to supply your own plants, sand, accessories and imagination.

Smoke (the fog of war?)  or helicopter downdraught swirls in the background and what look like explosions are suggested – all  very dramatic, if not quite epic!

By the look of it, a green enemy soldier is glimpsed bottom left of the Army Silver Grey or Germans to give an idea of how to play – buy more tubs of different coloured figures for the ‘Epic Battles’ promised on the label!

There is a certain bold Heinz Soup-ness to the label design which I like.

The different nationalities are given different colours – Army Red or American, Army Green or British and Army Silver / Grey or German.

Each label and lid shows the appropriate coloured infantry inside and a different front label with different picture for each coloured army.

The Army Green or British forces are pictured with a helicopter, the tank and battle-bashed noticeboard not provided – raid the toybox for these.

A flag to defend is helpfully included. Defend the flag!

The most puzzling figure colour choice is the Army Red or Americans. Arguably red is part of the American flag, but maybe it is supposed to be a sort of brown camouflage? Tan would have been another suitable plastic soldier standby colour familiar from the Toy Army Men standard contrasting colours of Green and Tan.

I imagine in other parts of the world in their versions of pound or dollar stores they are differently flagged and packaged to suit local conditions. Something to watch out for whilst web-surfing …

The American or Red Army troops (hang on, isn’t Red normally Russians?) are pictured with hovering helicopter (not included).

The back of the tub label has the excitable  text backed up in Spanish, presumably because they are sold through Poundland stores (known as Dealz)  in Spain where a Pound is really 1.50 Euros. Doesn’t have the same ring somehow, popping out to 1.50 Euroland! 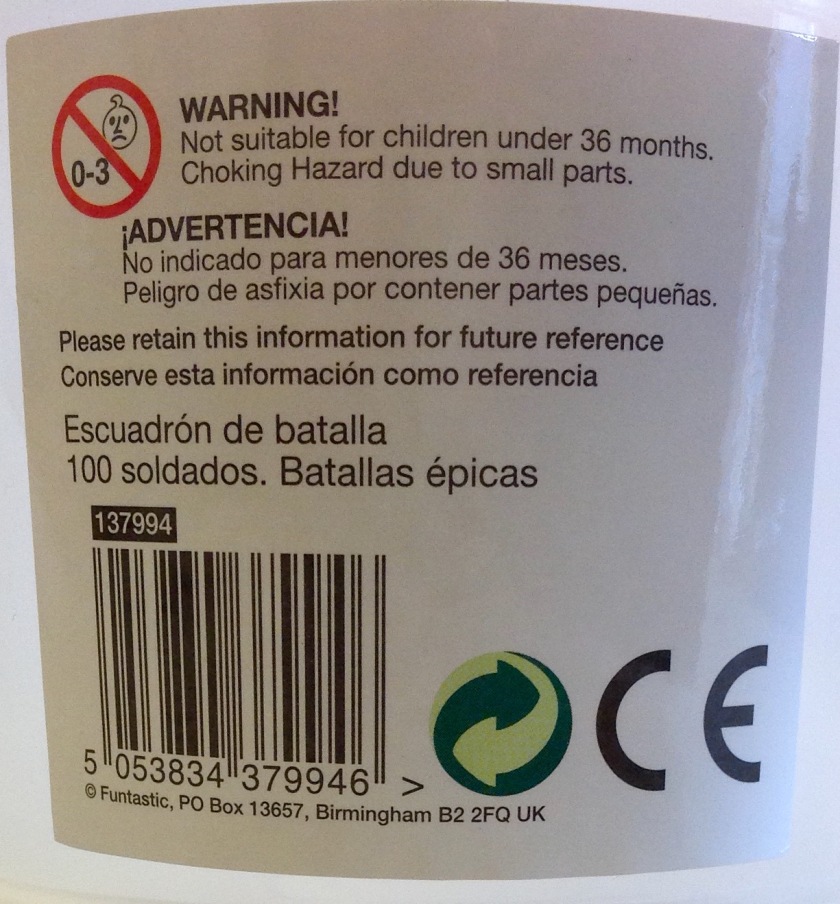 Blogposted by Mark, Man of TIN for the Pound Store Plastic Warriors Blog.