Remember the ‘dragons teeth’ scene of skeleton warriors bursting out of the ground in the old Ray Harryhausen Jason and the Argonauts films?

If you haven’t seen this film clip recently or never seen it, here is a YouTube snippet:

I like the dramatic illustrations on this packaging. Figures are somewhere between 42 and 54mm high depending on their pose and twistedness.

I was reminded of this Harryhausen Skeleton  scene when I luckily spotted two £1 bags of plastic skeleton warriors on a rummage stall at a local steam fair.

The lady stall holder had bought at auction years before for £2  a big plastic storage box containing bags and bags of cheap green plastic toy soldiers.

Most of the ruptured bags contained  the worst flattened, deformed and attenuated tall,  brittle plastic China clone types of toy soldier beyond even my (low standards for) repair or conversion  needs, not even for a £1 a bag …

Hidden amongst the box and elsewhere on the stall were two bags of skeleton warriors.

£2 later and my day was already made, before ten o’clock.

No one had bought these in years, until me, the lady said. The kids of today …

I mentioned to the lady that “Buying these in from the States online” would have daft  shipping charges. Sadly she had no more bags tucked away – at any price.

A couple of useful screen shots from the YouTube various Harryhausen video clips on Masters of FX and stop motion Animation.

How best to paint skeletons? Full of bony nooks and crannies.

After glue-gunning them to tuppenny (2p) pieces for stability, I noticed that the basic plastic colour of ivory / bone / off-white was probably good enough for the finished figure.

But how to bring out the detail?

I have used the pewtering (lazy paint) method before, mostly on metal figures, but not much on plastic.

Black gloss Revell Acrylic Aquacolor was quickly painted on and then let dry for as long as it took to cover a second figure.

Wipe the bulk of the paint off the first figure with kitchen towel and you find it stays behind in nooks and crannies like eye sockets, skeletal rib cages and between bone joints.

Then paint a third figure whilst the second dries before being  wiped … and so on.

Conversions and chopping about

One problem was that after years squashed into their packaging, whilst their flexible plastic had protected usually breakable parts like swords and spears, they were often bent, as were the skeletons themselves. The old trick of soaking them in hot water to straighten them did not work.

On the positive side, oddly contorted skeletons took away the ‘too many of the same pose’ problem. Various stiffening with extra wire spears (inserted into shield hands and base drilled holes) helped slightly right some but not all figures. 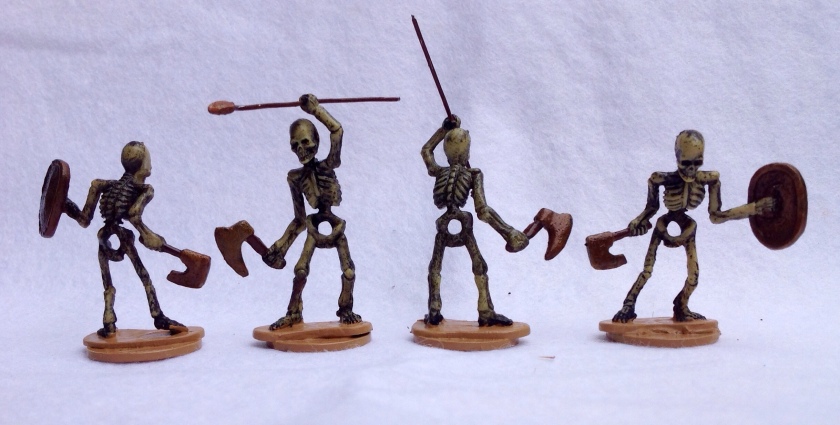 Some arms were super glued (not very easy with springy plastic) or cut and repinned with wire stubs to change arm and sword angles.

Other figures like the over-duplicated trumpet player (who needs four?) were thus converted to new uses.

Extra shields were added with suitable buttons wired on and painted.

Weapons and shields were painted in copper and bronze Revell Acrylic after pewtering.

Wooden spear shafts and axe handles seem to have survived perfectly preserved whilst the flesh has vanished – curious!

I was almost tempted to add some scraps of clothing using tissue paper but resisted to keep the figures more flexible in period.

One figure had an almost Breugel Triumph of Death or Hieronymus Bosch painting typocalyptic pose with skeleton ‘blood angel’ winged rib cage was given away to another family member as just far too weird – for now!

Finishing off the Skeleton Warriors

Sand brown (Revell Afrikabraun Matt Acrylic) bases were painted for that desert / earth / Ray Harryhausen look, then sprayed with Gloss Acrylic varnish spray. I have heard that metallic colours can run during varnishing, so I only sprayed the bases.

A lot of (admittedly lazy) paint and conversion work for £2 worth of figures but the result looks like they are much more expensive figures.

That is pretty much the whole ethos of the Pound Store Plastic Warriors blog. Cheap Joy!

I might need some slight tweaks for how to kill or defeat the already dead in order to put skeleton warriors into my simple Featherstone based rules for melee and small Close Wars.

Remember – Don’t shoot till you see the darks of their eye sockets!

Several other scenarios crop up – the renowned Colonel Fazackerly saves the day!

If England Were Invaded …

After reading a spot of invasion literature like William Le Queux, mixed with a dash of the Angels of Mons, I thought afresh that these skeleton warriors with shield, axes, swords and spears could well be the legendary Arthur and his Ancient Britons arising from their slumbers and returning to save the day If England Were Invaded:

In 1914 … an unlucky Prussian sentry fails to notice that he is being followed.

An unlucky Nazi sentry fails to notice that he is being followed down an English country lane … “Gott In Himmel!”

I wonder how the knowledgeable, enthusiastic and avuncular Featherstone style would have adapted to orcs, gremlins, wizard magic and skeletons?

Not that far off his Ancients rules and suggested Imaginations and Hyborian campaigns with Tony Bath?

Many of Don’s fantasy figures would no doubt be based on conversions of the versatile Airfix Romans, Ancient Britons, Robin Hood and Sheriff of Nottingham figures and Castle sets.

No toy soldiers in the pound store today. However I found these rough looking characters in a local covered market stall for baking and cake decorations.

I enjoy finding unusual sources of figures like this, adding some variety to the usual figures.

They are made in flesh tint hard plastic, crudely but colourfully painted to adorn a pirate cake.

Six colourful pirates for a pound! Proper piratey poses amongst the figures including a pegleg and crutch, parrot on shoulder carrying a treasure chest and another with shovel to bury it.

One has a knife carried in the teeth, keeping hands free for climbing the rigging and there are plenty of cutlasses amongst them. Good Treasure Island material here.

One of them with an oar looks like a girl pirate. They were all mixed in with the usual Cake Dec box full of sports people, so ‘she’ might really be a sporty female rower.

Figures like these can of course be repainted to make bandits, navy crews or other irregular troops.

The blue coated captain looks like he has a broken sword or pistol.

He was the only of this pose available. Should be an easy repair.

Huzzah for cakes of piratey death! Fifteen men on a dead man’s chest, yohoho and a bottle of rum … and all that.

During a supermarket stroll past the film and DVD  tie-in sections, I spotted amongst the superhero, space and fantasy figures this interesting 40mm-ish metal figure of Jacob Kowalski from Fantastic Beasts.  Interesting movie, well worth seeing, sequel due soon.

Perfect figure for a civilian, a spiv, a spy or escaped POW?

This Kowalski civilian  figure put put me in mind of some of the stylish 1940 photos and game scenarios set up by Allan Tidmarsh on his various blogs.

How would he match my 42mm-ish pound store figures?

Although the Jacob Kowalski figure was not in a pound store (cost £1.97), this and the trashed Yesteryear Ford Model T (£4 junk shop / market stall)  were offset by finding two pots of lolly sticks for 10p each (garden centre sale). These  usually retail in pound and craft stores at £1 to £1.99.

A saving of almost £4 on lolly sticks, which are useful building materials and lolly sticks to attach figures for handling during  painting. Two useful plastic storage pots too!

Found this on my travels in a National Trust gift shop for the not strictly pound store price of £4.50 (but hey it’s for charity). Pound store bizarreness and  quality though!

It is available online too https://shop.nationaltrust.org.uk

The calves are small enough to be cows in a smaller railway or gaming scale.

The piglets are pleasingly stocky and wild boar like (lunch for Obelix and Asterix).

The rabbits (?!?)  are just plain bizarre. The chickens and ducks repainted are good for farm vignettes.

What I find most fascinating are the cloned farm figures which are in that indeterminate 40 to almost 50mm sizing. They are in slightly soft plastic, rather than hard and brittle.

I think the figures will repaint well enough for civilian figures, as will the outhouse repainted to a small distressed farm outhouse. It is a clone of Britain’s Plastic small farm buildings that I still have.

The Mini Farm set is manufactured by www.keycraft.eu, an interesting low cost plastic toy trade retailer with lots of business retail insights on their website. The Sceince of Impulse Buys? Note:  Trade only.