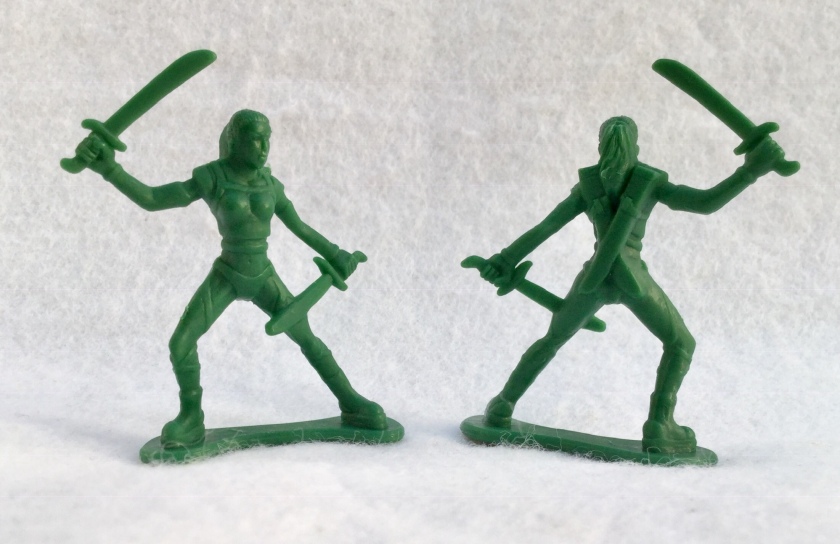 Not exactly Pound Store Plastic Fantasy Warriors  but a job lot picked up cheaply on EBay.
These figures are not to my knowledge usually sold in the UK so often have hefty shipping. There are multiple copies of each figure, which will allow flexible painting.

There are several female or androgynous figures in this set that might or might not  qualify as Pound Store Plastic Warriors blog contribution for #FEMbruary.

#FEMbruary is the online painting  challenge to find (and eventually paint) believable female gaming figures; some of these figures are almost heading  down the “chain mail bikini fantasy” road, depending how much bare flesh you choose to paint. https://leadballoony.com/2019/01/31/more-scumbos-and-the-fembruary-challenge/

I have  six types of these generic fantasy figures, plus the picture explains where a spare dragon and two trees came from. 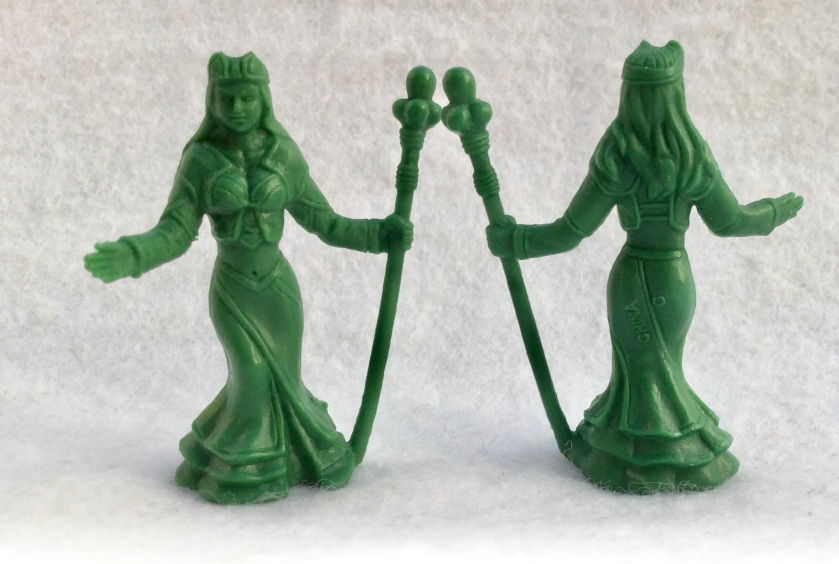 2. The Screaming  Sorceress Enchantress Crone with Club  and Skull belt 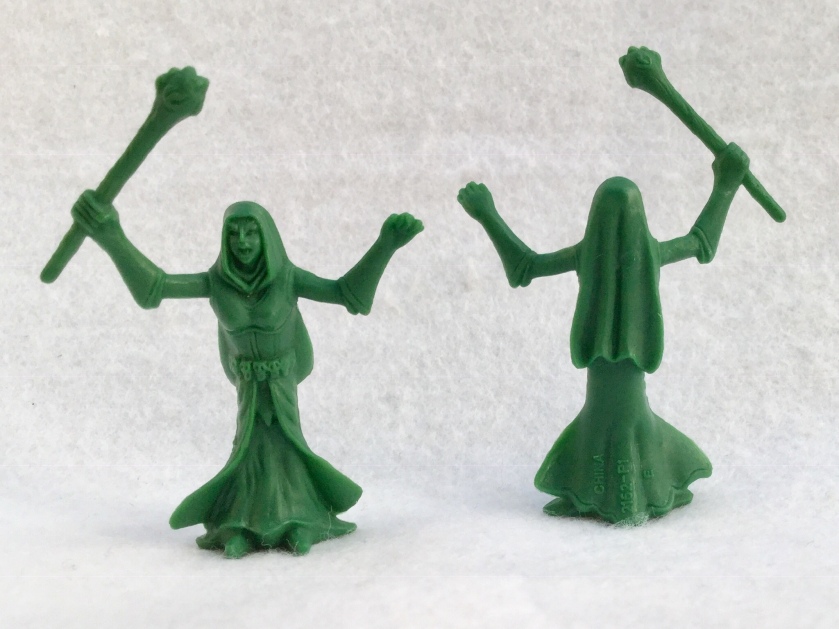 3. The Hunky Male (or Female?) Archer 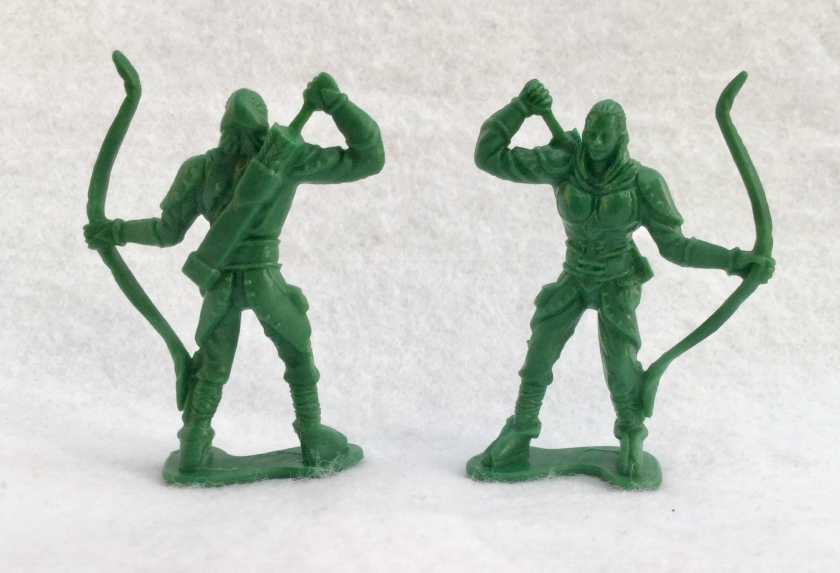 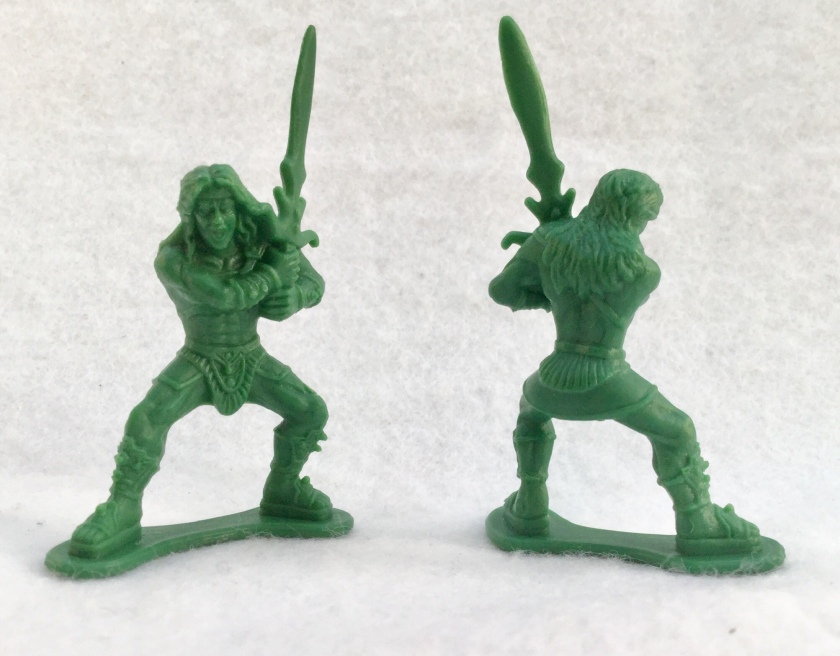 5. The Angry Dwarf or Giant Troll depending on scale 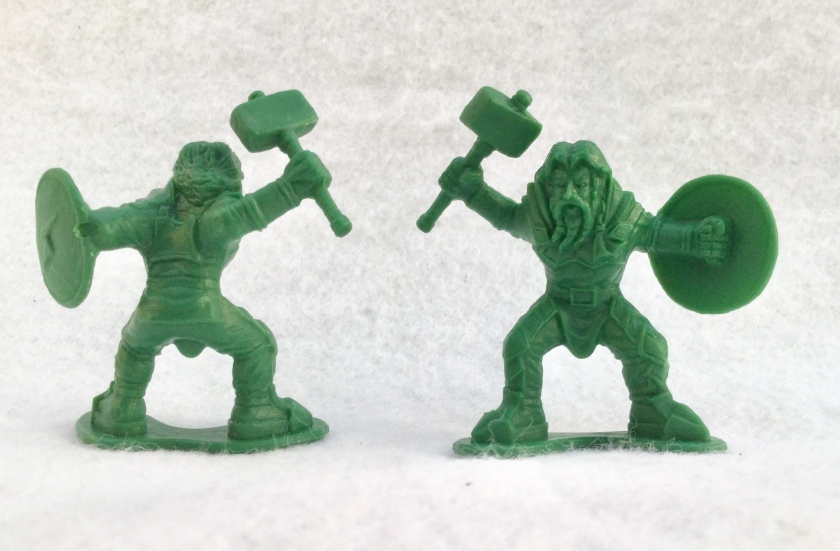 A useful 50-54mm set, especially with some duplicates to paint up for different periods.

I can see these suiting Duelling games, Space games … another set for the painting table, but maybe not this #FEMbruary.

Any clue as to maker welcome. 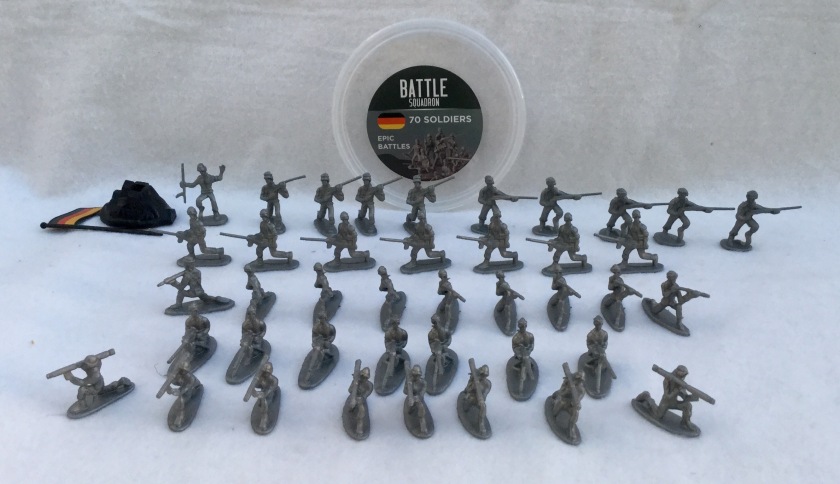 Whilst picking up The Unincredibles ‘bootlego’ superheroes in Poundland this weekend, I spotted a sight for sore eyes.

A lone tub of the 32mm-ish Penny Dreadful figures (as I call them after Ross Macfarlane said about them).

As you can see converted here  https://poundstoreplasticwarriors.wordpress.com/2017/11/26/pound-store-plastic-colonial-infantry-on-the-painting-table/

I had not seen these tubs in the pound store for months.

Forlornly, it was one stray tub of these Soldiers that must have been lurking at the back of a shelf, and sadly with a quarter less contents. When I first bought these it was 100 soldiers for £1. Now it is 70 soldiers for £1.

As somebody wisely commented on my blog, these are now not quite so Epic Battles. 30% less Epic.

I bought the tub anyway, for old times sake, as they will always come in useful.

The proportions of figures in each tub seems to vary quite widely too  – this one seemed to have a high proportion of bazookas and machine gunners.

They could become great little figures with a bit of work.

My latest find at Pound Land is another set of Superheroes to match those I found in November last year: https://poundstoreplasticwarriors.wordpress.com/2018/11/17/rip-stan-lee-and-farewell-from-the-pound-store-superheroes/

These figures are cleverly made to look slightly like well known Super Heroes without having to pay super (hero) amounts of copyright. I see glimpses of Iron Man, Spider-Man and Hawkeye.

Some people may look down on such ”bootlego”  budget figures at four Superheroes for a Pound. 25pMan anyone? The QuarterofaQuid  Kid?

Even the real Lego base plates are quite expensive – however in Poundland  this grey square cost only a pound, much less than Lego would charge.

However these generic, unnnamed, slightly derivative super heroes have what my parents called “play value”.

Hopefully the imagination of a child will make them priceless and valuable, as set out in this lovely paragraph in the  Little Wars chapter  from John G. Garrett ‘s Model Soldiers – A Collector’s Guide, late 1950s: 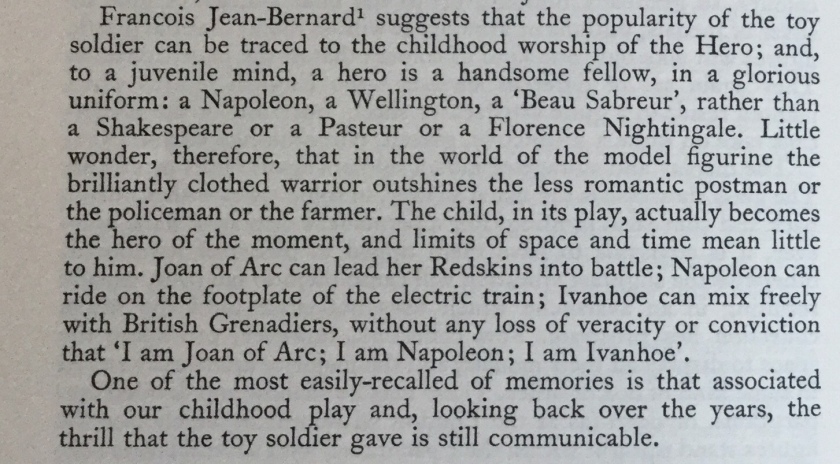 These ones will sit happily on my desk alongside the first set as inspiration. Repeat after me – Never forget,  tiny plastic Super Heroes “I am Joan of Arc; I am Napoleon; I am Ivanhoe” … 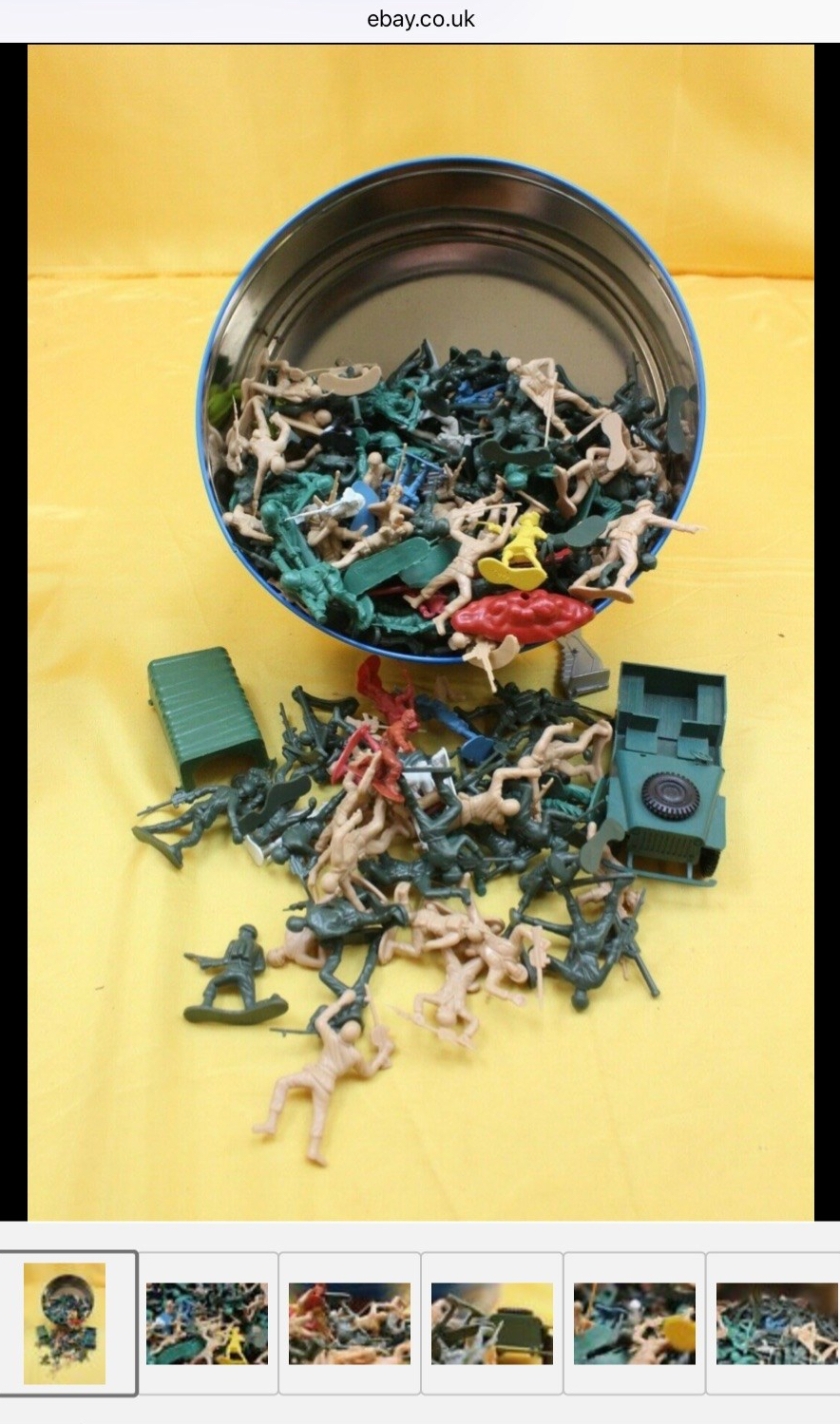 So among the flock of ordinary everyday ‘birds’ you might spot the odd rarity or some new or unusual figures.

Spotted on an Air Ambulance EBay shop, I saw a useful tin of the usual dull coloured green and tan army soldiers but mixed in were a few colourful flashes. Based on aglimpses in the photos, I took a punt or gamble on bidding, as nobody had yet bid on this job lot tin.

In return for what is effectively a small donation of under a tenner to the Air Ambulance that might fund a few vital seconds of lifesaving flight, a tin arrived by post a few days later.

A good deal – I get all the interest of my hobby, whilst a worthwhile charity gets a small donation without me having to climb mountains, run marathons or walk the Great  Wall of China. Happy result!

I couldn’t wait to open it and see if what I had glimpsed was worth the money. I shall share the joy with you now,  share my virtual jumble sale rummage joy.

The first odd ones I spotted amongst the green and tan army figures were these peculiar pirates with very oddly moulded pistols.

A host of useful bicorne era figures emerged, mostly around 45mm. I often spot figures like these on US EBay, Etsy or Amazon but they are not usually available in the UK. Regional plastic  ‘tat’ envy.

These seventeen American War of Independence era figures are in patriotic red white and blue (Union Jack or Stars And Stripes?), roughly 42 to 45mm.

I had not seen these tricorne figures before, they alone were worth the price of the whole tin. Maybe one of my blog readers recognises the make? 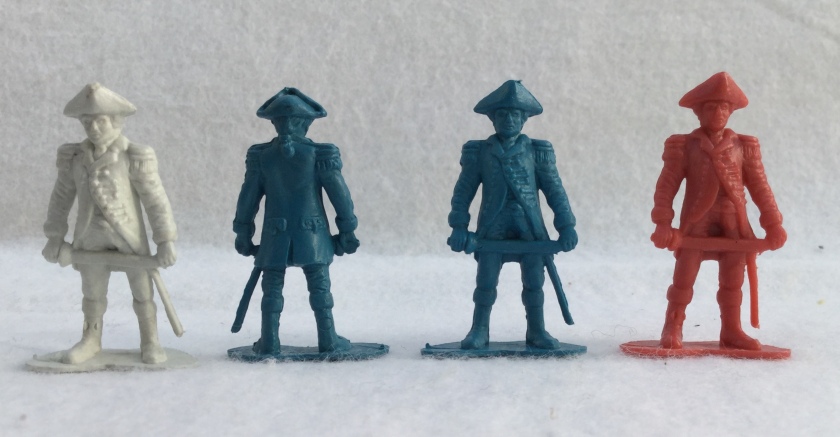 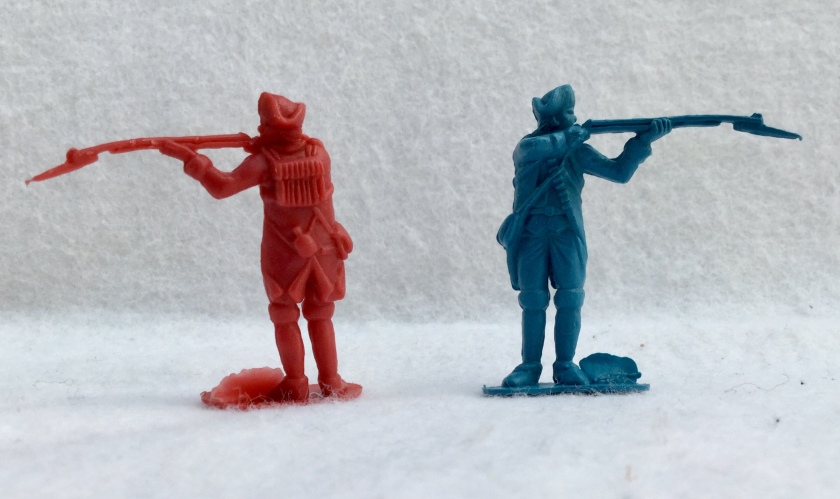 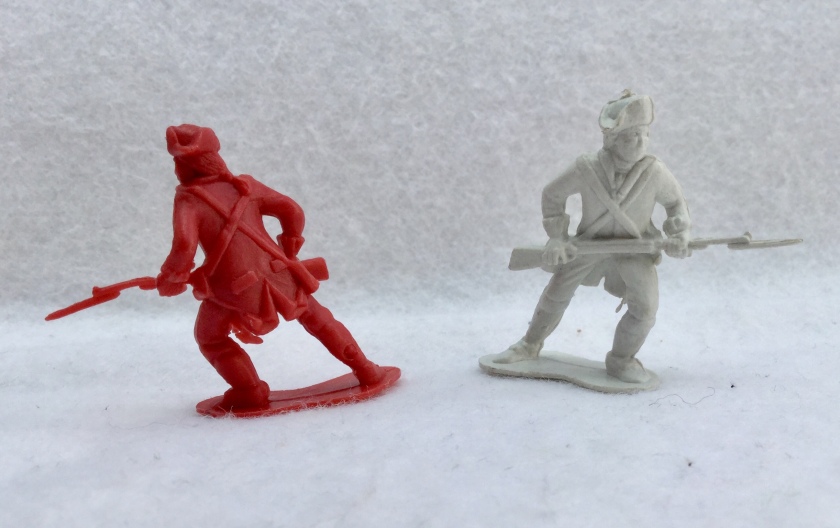 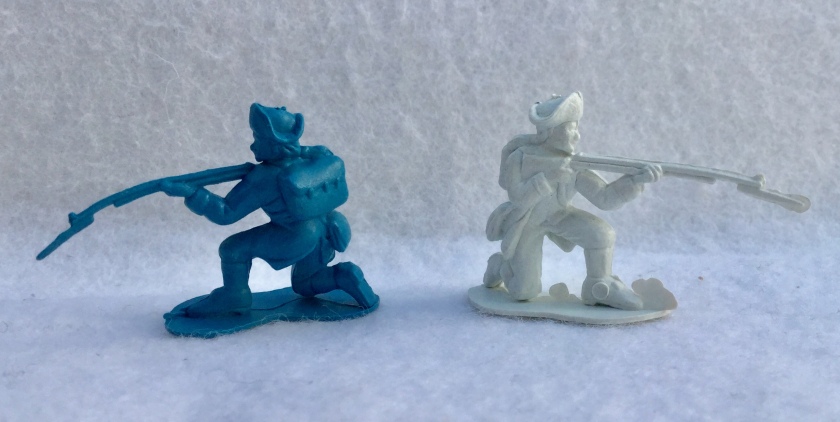 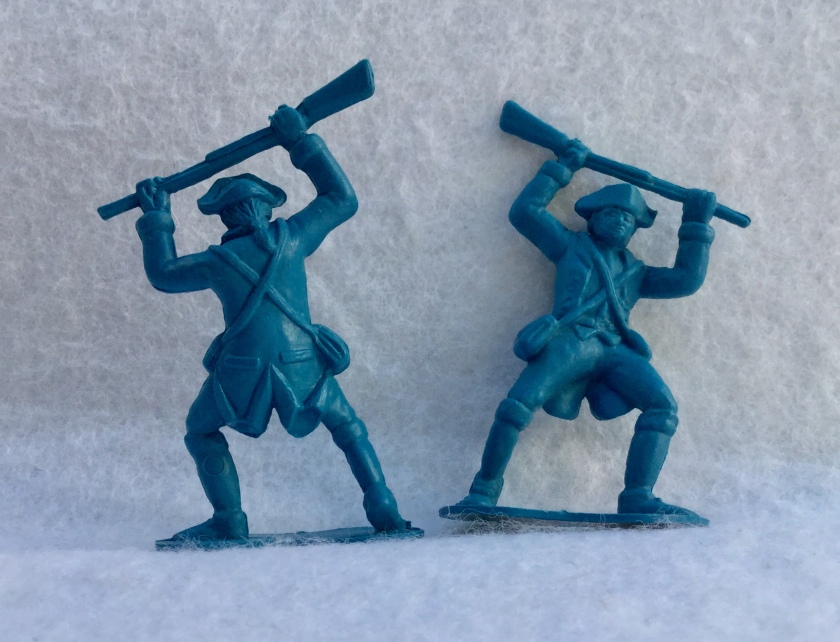 These are worth painting up for some French-Indian Wars and ‘Close Wars’ type skirmishes in the forest against similar smallish 42mm pound store plastic Indians or natives. I use the ‘Close Wars’ two page rules in the appendix to Donald Featherstone’s War Games (1962, recently reprinted). https://manoftinblog.wordpress.com/2016/06/09/close-little-wars-featherstones-simplest-rules/

Christmas bought me some 54mm BMC plastic figures from the same bicorne / tricorne period from a UK online supplier Drum and Flag who happened to have a few bags in stock.

Again worth the money are these 19 Matchbox US Infantry 54mm copies and a useful Jeep. Modern copies of these figures are still around at about 30 for £6 to £7.

Overall a happy rummage through this tin. I hope you enjoyed it too!

Over the last few weeks I have been spending a bit of Christmas money on eBay, picking up the kind of cheap plastic figures you don’t normally see in UK toy stores. A few pounds here and there.

Being either new-ish secondhand or sometimes a whole  chocolate tin of mixed figures, the scrapings of someone else’s toy box with some tantalising glimpses of unusual figures, they all need a good wash before painting. It should remove any grime and mould release chemicals.

With so many figures,  the sink wasn’t an option so the bath tub stood in this time.

To dry so many, I rigged up an old beach toy net (commonly used for storing bath toys) and they  all drip dried pretty quickly.

Next job is sorting them all out … an exciting mixture of modern plastic 40 to 54mm soldiers, pirates, redcoats, ninjas, fantasy figures male and female  – and skeletons which sank.

I shall post photos of each group in the next few posts.