For anyone who tried and failed to make Paddy Griffiths / Andy Callan Hair Roller armies from the early issues of Miniature Wargames c. 1982/3, an article which surfaces again on blogs from time to time – its ‘Fess up time. I tried and failed the fiddly bits like guns, horses and limbers.

As hairdressing was one of our family trades, the disappearance of large numbers of hair rollers would soon be noted. After cutting up one or two, I got bored with these tiny (2mm?) armies but still have these remnants “to help me remember” (in the words of Mr. Benn).

I notice the Wargaming pastor has also been fiddling around with 2mm armies recently.  https://thedeathzap.wordpress.com/2019/07/08/weve-had-6mm-fantasy-how-about-2mm/

My original article is here with brief mention of rollers:

So as a result I was delighted to see this diagram again by Andy Callan from Miniature Wargames no. 9 on Tony Adams’ blog recently:

Others were more successful than me in their hair roller Army building http://flownlegions.blogspot.com/p/blog-page_15.html

When hair roller armies are mentioned, there is often also talk of a near legendary painted metal screw army idea from the 1960s. The idea was first featured  in an early Miniature Warfare Magazine in 1969 – and I have been chatting by email to an inventive and handy man called Tony Adams who has quietly over the last 50 years been building up a vast wood screw army.

Tony has been cataloging and photographing new additions to his forces, in the form of some clever scratch built vehicles such as GS wagons, artillery and 3D printed machine gun sections, using everyday materials like balsa wood, tooth picks and drawing pins. His blog is well worth a look through at https://thewoodscrewminiaturearmy.blogspot.com

Tony reprinted the  original 1969 article in Miniature Warfare by K.F. Jones that started it all:

The full article can also be seen on Vintage Wargaming http://vintagewargaming.blogspot.com/2009/06/hyper-miniature-system-by-k-f-jones.html

The scratchbuilt limbers, GS wagons and other support materials are well worth looking at and have given me some ideas for the future for my Peter Laing 15mm figures. There is also some clever 3D printing: https://thewoodscrewminiaturearmy.blogspot.com/search/label/3D%20Printing 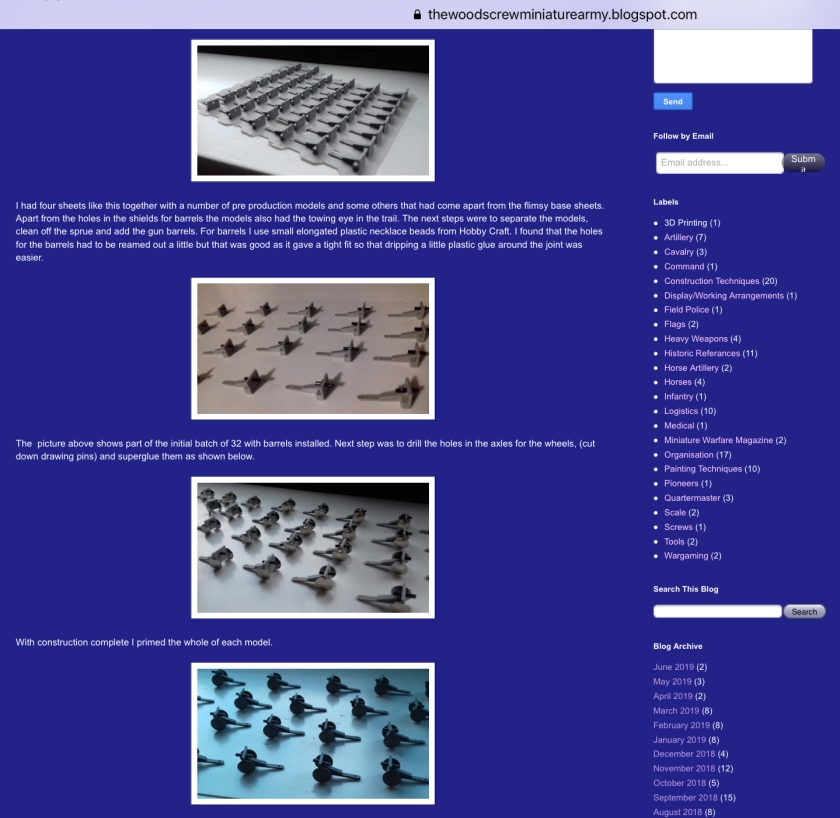 All pictures / screenshots of his website posted with Tony Adams’ permission.

2 thoughts on “Design ideas from the Legendary Woodscrew Wargames Army”