Pottering around the garden gathering leaves before work, I spotted this lone warrior, left behind on duty months or years long ago after some forgotten garden game – just like the one in the Robert Louis Stevenson RLS’ poem The Dumb Soldier.

His radio aerial was almost intact when I found him but now needs some repair.

Long has he been on duty reporting back to base on all he saw.

When he finally gets painted, he shall get rewarded for his long service with some corporal or sergeant stripes. I have marked his base up to remind me.

The Dumb Soldier poem can be found in my blogpost here:

This figure is one of mine, lost long ago. I have found figures before on beaches, as well as bought wrecked figures from metal detectorists and repaired them back to gaming use.

I’m not alone it seems in finding figures on beaches as this plastic pollution / beachcombing report from Cornwall Live website shows:

Whilst even more unusual are the well weathered and wave shaped, beach battered figures found on a beach shown on Etsy: 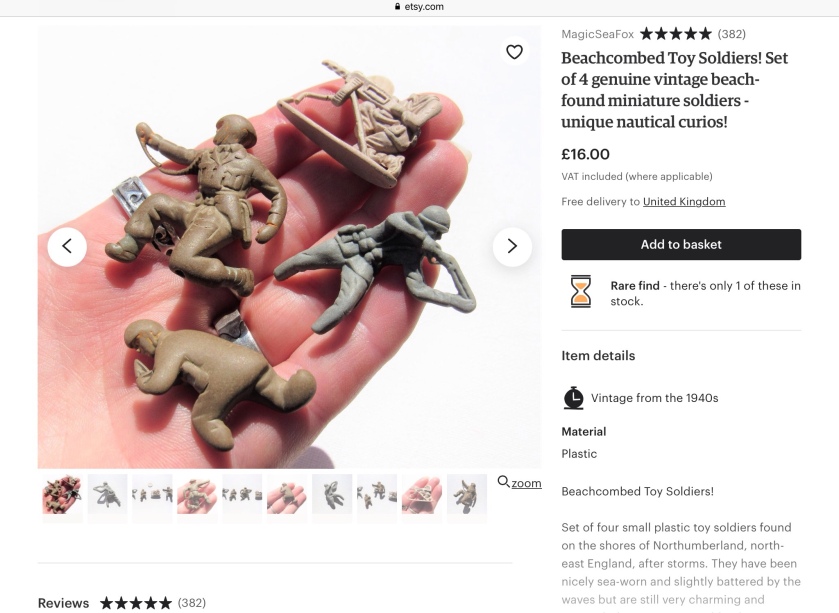 I recognise the Britains Kneeling Officer washed overboard from the Assault boat, two recent plastic clones of a (Matchbox) American and a China made Pound Store set German infantryman.

I wonder – What’s the most interesting thing that has turned up in your garden or on beach-combing trips?

The Space Marine figure was missing from my box’s random assortment of poses.

This slow dropping of figure numbers per £1 has been going down steadily over two years, reported here:

It’s like the Third Doctor Who’s UNIT friends have moved to Willenhall.

Epics – getting smaller with austerity cuts all the time.

Historians of Plastic Tat packaging will value this visual record.

I have noticed that the plastic is slightly harder or tougher, more game token and less flexible than before.

Update: the Germans are now blue, not silver. The space pilot figure does exist! 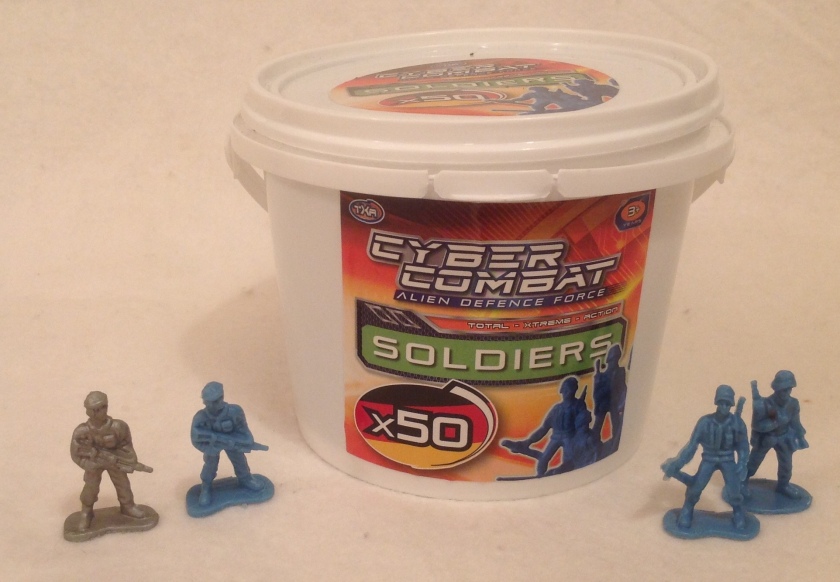 Other sources and suppliers

At a recent seaside store I found the ‘older’ Combat Force 100 figures in handy two colour pack of traditional green and tan 32mm-ish figures for £2.

All still good 32mm figures, ripe for paint or scalpel conversion, as shown on some of my previous posts, for example:

I’ve put down for a bag of 24 figures plus shipping . If all goes well, this time next year BMC should be shipping around the US and sending a pack off to me in the jolly old U.K. 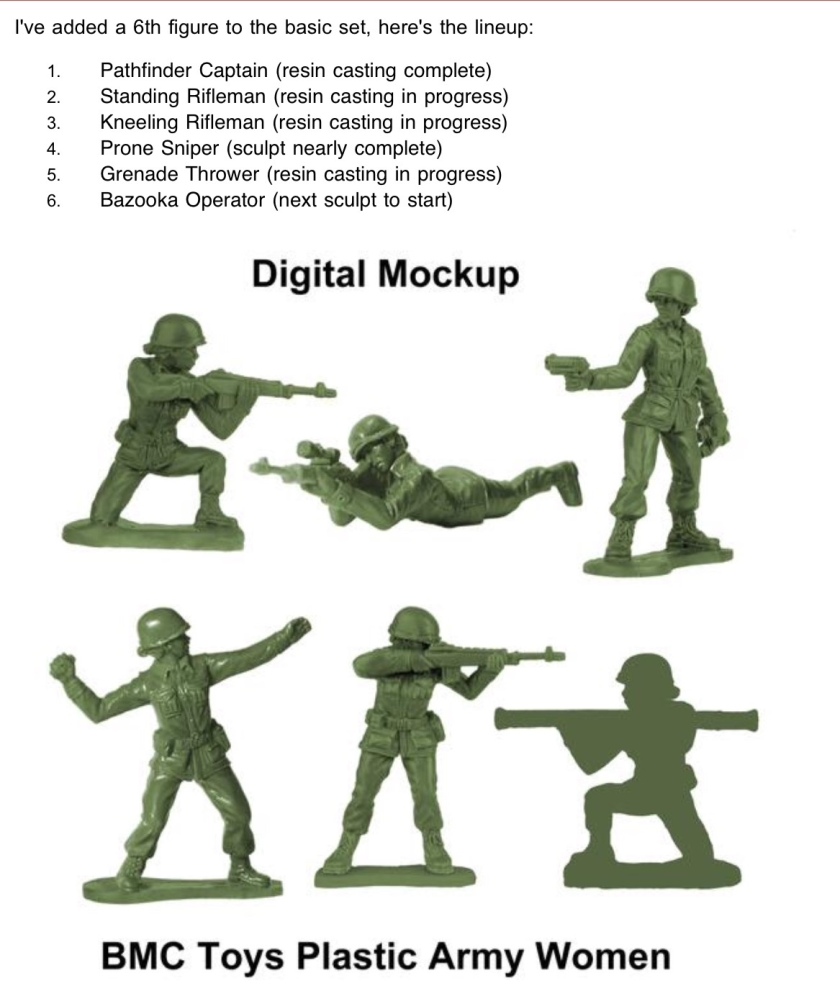 Kickstarter opening due in next few days – looking good so far

Find out more at https://bmctoys.com/blogs/news/bmc-toys-plastic-army-women-project-update-5

Some magazine inspiration for my LCC Landing Craft Carton

This is the first blog post on my carton craft

Now here is how I did this in easy to follow stages:

Stapling gets tricky round the back end unless you have a very nimble slim stapler and cast iron fingers.

Details such as the machine gun cupola are added, secured by hot glue gun or staple.

The machine gunner figure is cut down to size to fit in at a low profile and so can be changed. A different sized / scaled  or nationality figure  can be added and removed easily.

A small square of Magnetic strip on base should secure the figure in place. Previous attempts to glue the figure  to the lid to make him interchangeable  (seen in early photos in background) left him too high up and exposed.

Details such as the hatches from scrapbook crafting thin wooden  ‘Scrabble’  squares and cocktail stick radio masts or flagpole pennant masts are added.

Hot glue gun and staples are used to secure the back flap section, sealed with a coffee stirrer strip secured with hot glue.

Next step is to glue into place coffee stirrers to strengthen and ‘box’ the sides as desired. Further coffee stirrer strips can be added to cover staples and add to the appearance of the front landing flap.

Add as required to create a suitable boxy feel of a tough little craft.

Next step is to paint base colour grey with acrylics which seem to work well enough on the waxy plastic surfaces. Several coats of paint and varnish required.

Your landing Craft should still float in flat seas like a pond with not too choppy waters. 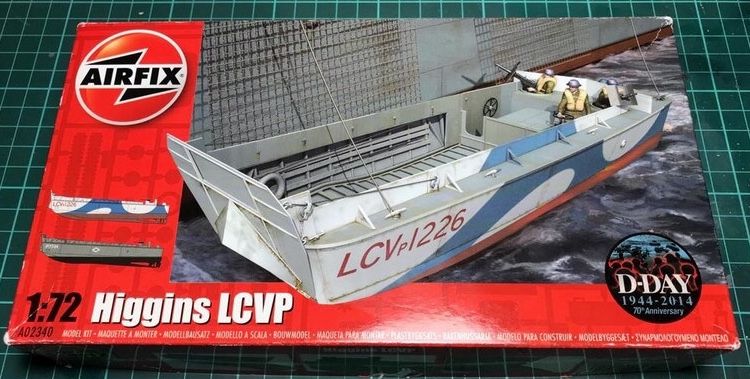 Additional details of fenders, lettering and ropework can be added as desired. I looked at this advert for King and Country figures and Landing Craft for ideas.

I have a soft spot for The Rangers shown in the King and Country advert for their Normandy ’44 range. These brave men trained on the cliffs around the lovely North Cornwall seaside town of Bude, where they were billeted on the local townspeople and are very fondly remembered. The Bude cliffs were a good enough  match for the cliffs in Normandy.

On D-Day the Rangers  scaled  the cliffs at Pointe Du Hoc to capture a battery of big guns at a great cost in dead and injured, only to find that some of the coastal guns were fake. The barrels seen in aerial photographs were large tree trunks or telegraph poles. Not all the Atlantic Wall defences were what they seemed! They had to track down and destroy the real ones nearby. https://en.m.wikipedia.org/wiki/Pointe_du_Hoc

There is  a poignant small display about the Rangers and their equipment  in Bude’s The Castle Museum, an unusual early Victorian house on concrete and sand created by Goldsworthy Gurney. Memories of the Rangers in Bude – https://youtu.be/QMnhb5lNsWA

Goldsworthy Gurney a haphazard inventor pioneered the Steam Waggon or Steam Car, including a viewing by the the British army in the 1830s. If it had been commercially successful, the British Army could have headed off to Crimea with Steam Powered armoured vehicles and gun tractors almost half a century or at least decades earlier. Pure Steampunk! https://en.m.wikipedia.org/wiki/Goldsworthy_Gurney#Gurney’s_steam_carriage

If you find yourself in holiday in the area …

Being a few miles from the English Civil War battlefield at Stratton  and other wartime sites such as Davidstow Airfield / Wartime Museum, there is much that Bude has to offer the history tourist including its pre-Victorian  “Canal” (1819).