Along with the furious Spaniards / Conquistadors shown in my recent blog post, Alan Gruber of the Duchy of Tradgardland blog had kindly gifted me some opponents and forest fighters in the form of these 54mm Chintoys Mixtecs and Zapotecs from a unfinished project of his. 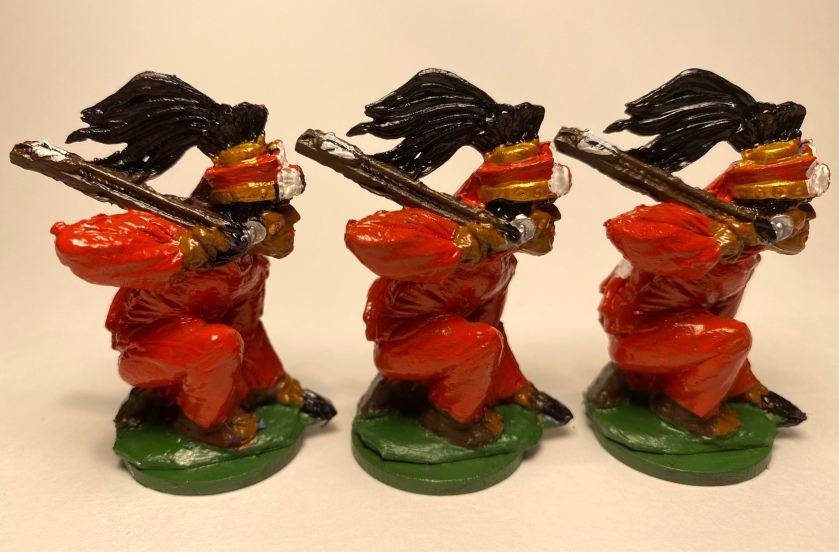 As you can see from comparing the cover illustration by Angus McBride, some of the Chintoys figures are sculpted fairly faithfully close in appearance to the Osprey illustrations. Chintoys also make separate boxes of eight figures of Aztec and Mayan warriors (available online). 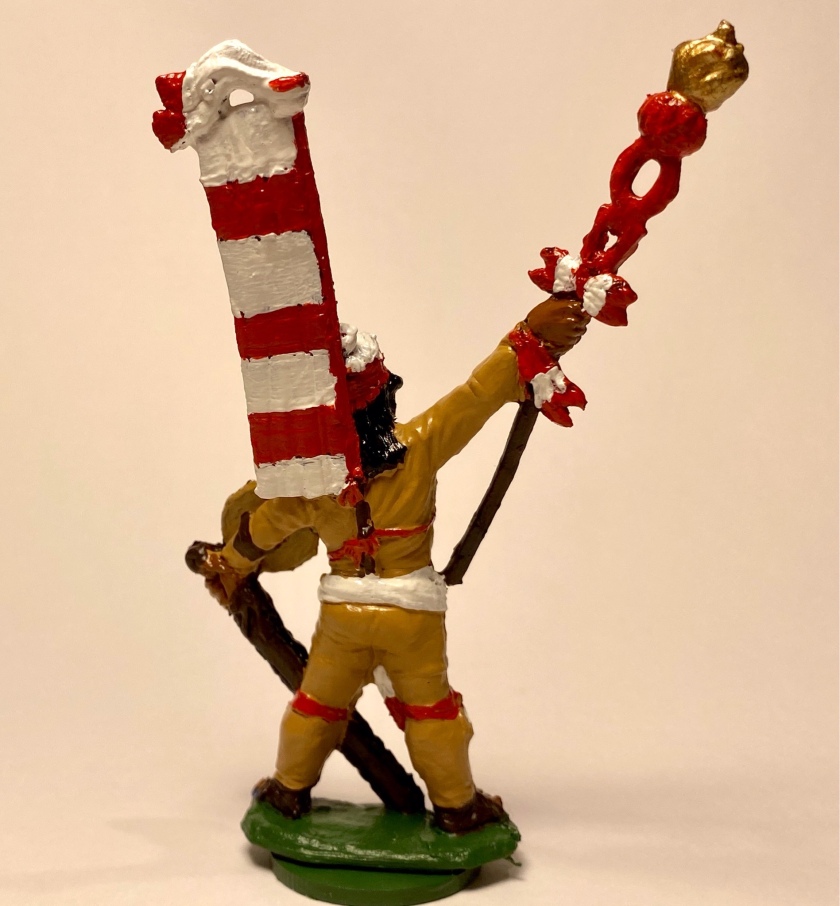 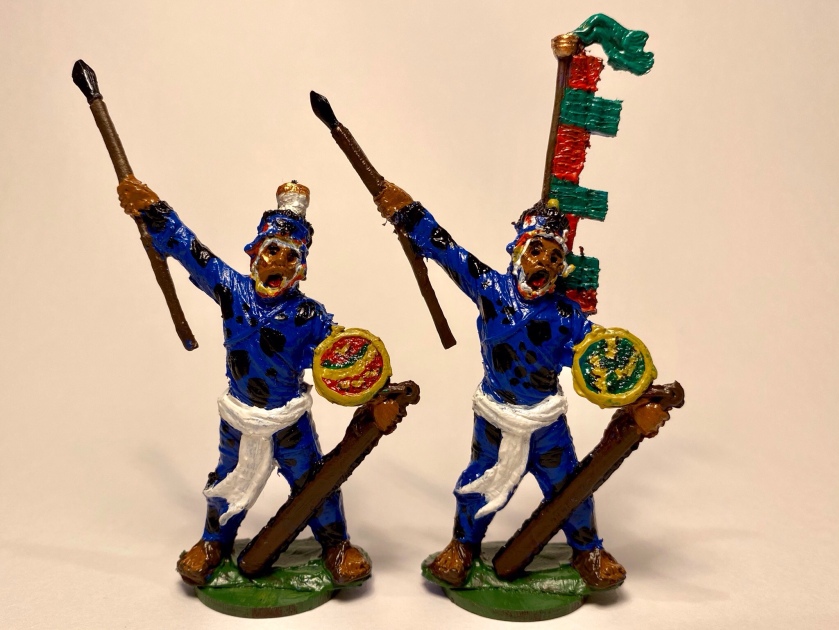 The original Jagaur and Eagle styled warriors both have great animal head dress – here are my Gull Warriors, stylish and stylised figures that look like carvings or Codex drawings. 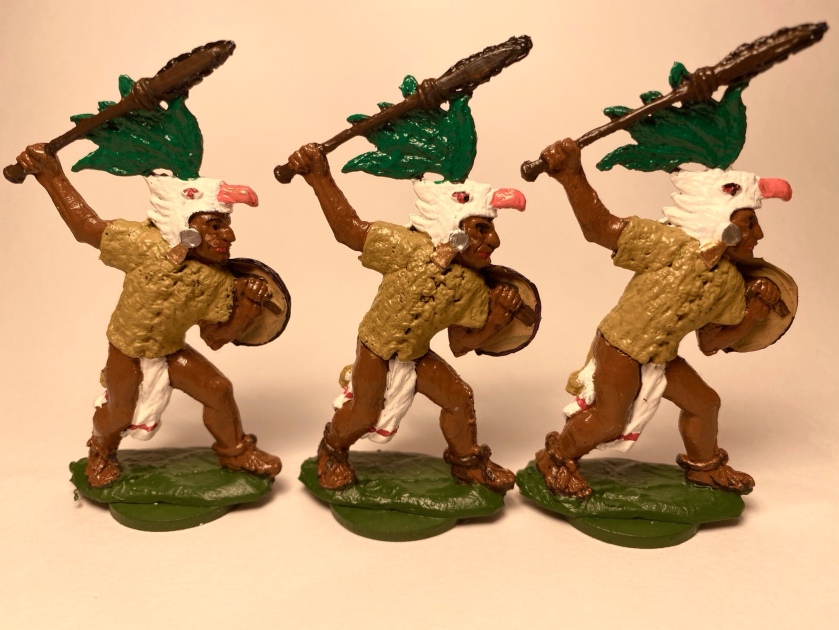 Rather than be too specific to a historic period of the slightly confusing Mixtec and Zapotec enemies and allies of the Aztecs, I thought I would adapt the paint scheme slightly to form a new tribal opponents of the Spanish Conquistadors, the not so well known allied South and Central American tribes of the ManoTINcas and the ManoTINtacs led by their Priests and their Empress Queen Thatzyerlottal.

I have created a more uniform tribal look by restricting myself to simple red stripes on the white maxtlatl loin cloth worn by most of the Warriors.

Alan had sent me several bags of these eight Mixtec figures so I had several of some of the Officer poses with spears and their battle flags strapped to their backs.

With a small skirmish force, I did not want too many officers and priests, so I cut down some of these feather banners to make more fighting men. I kept the feather crests and attached these by drilling, pinning and gluing this to the top of the head.

Many of the warriors are armed with the widely used South American Macahuitl wooden sword or club with obsidian volcanic glass blades:

Variations existed of this bladed weapon in the form of a obsidian bladed spear, the tepoztopilli. 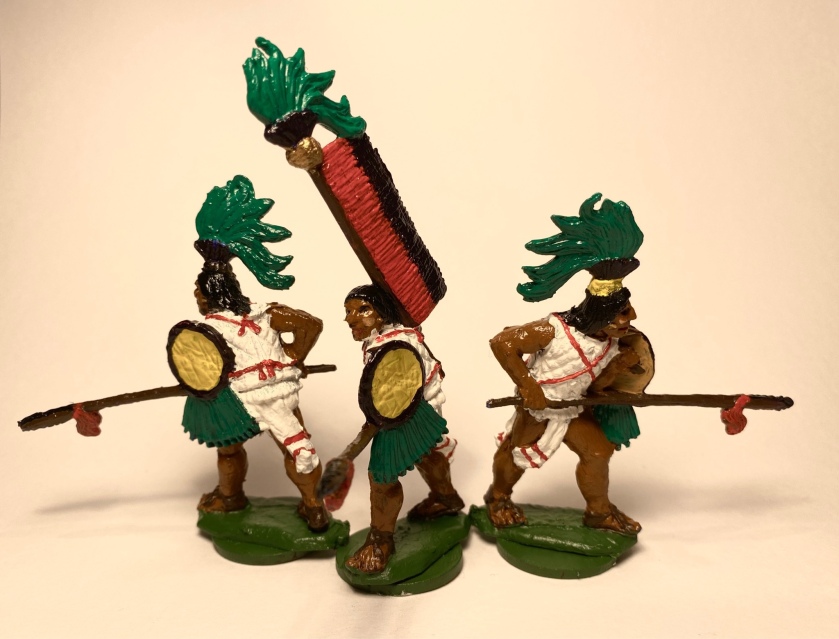 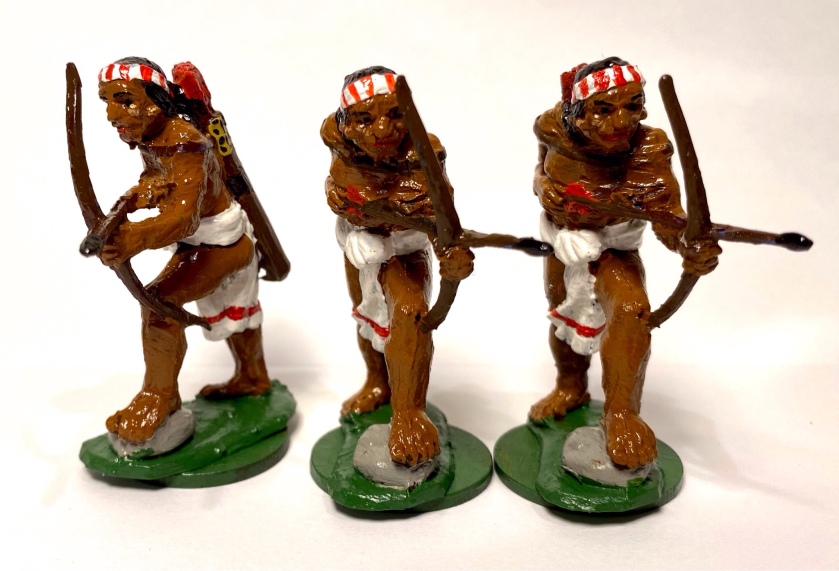 Some of the kneeling red clad figures with atlatl spear throwers shown on the Osprey cover were so stylishly modelled in such a stylised way that I thought they might become statues in a jungle temple. These were undercoated in stone grey paint.

This stylised statue look is not so surprising. Much of what we know of Aztec / Inca / Mayan life is from post Spanish conquest Codex drawings and carvings at their city sites.

However, being short of troops, I briefly considered if they could be stone warrior statues that might come to life when the Spaniards raided their temple. They remind me heavily of the Inca type figures in Tintin Prisoners of The Sun and Rascar Capac in Tintin The Seven Crystal Balls https://tintin.fandom.com/wiki/Rascar_Capac

Eventually on the same “too many chiefs, not enough Indians” logic, these stone warriors were reanimated with gloss paint treatment as live warriors – the original figures are Zapotec warlords with arrow thrower.

I have used bright Revell Aquacolor gloss acrylics, to try and match the more colourful aspects of feather crests and shields, as they are shown in the Osprey Aztec, Mixtec and Zapotec book and the Osprey Men at Arms 101 The Conquistadores volume , also with Angus McBride illustrations which also colourfully covers Aztecs, Mayans and Incas.

If Britain’s had made Mixtecs and Zapotecs, Aztecs, Incas and Mayans, I hope they would have come out of the factory looking this shiny and colourful. 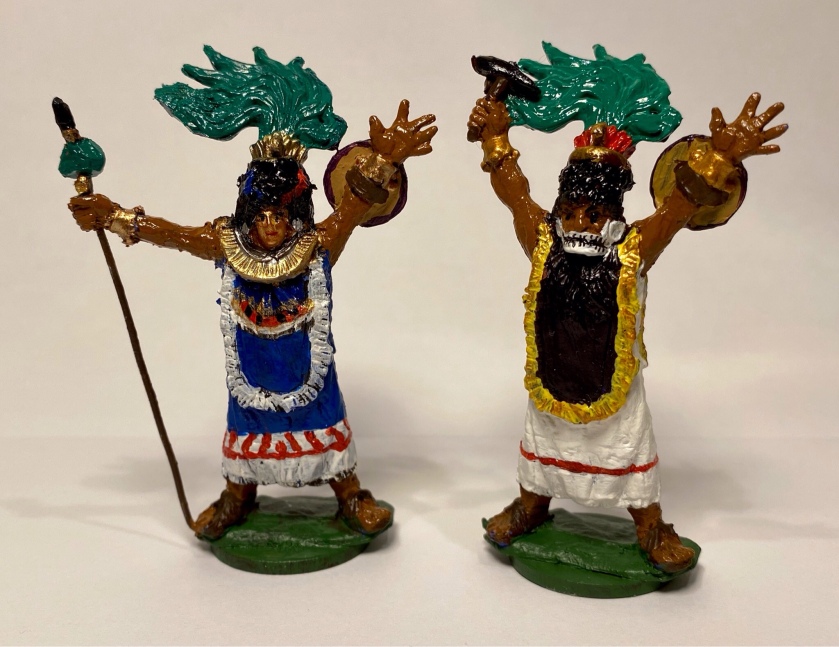 The most striking figure in the Osprey Aztec, Mixtec and Zapotec Armies book is the Mixtec Oracular priest – sadly they didn’t make the Mixtec queen, so a duplicate priest figure had some cosmetic surgery. Literally a face lift!

I shall feature on a separate blog post how this spare Mixtec priest figure was changed into a Mixtec queen. I still need to work on ‘her’ overlarge left hand.

As mentioned, I have not painted these figures exactly as they are shown in the Osprey books. I have kept the shields simple with uniform yellow and purple round edge patterns.

As well as the colour plates in the Osprey books, I was also guided by the bold colours in one of my childhood library books (pictured below). I like the strong colours such as the bright green quetzal feather plume headdresses. 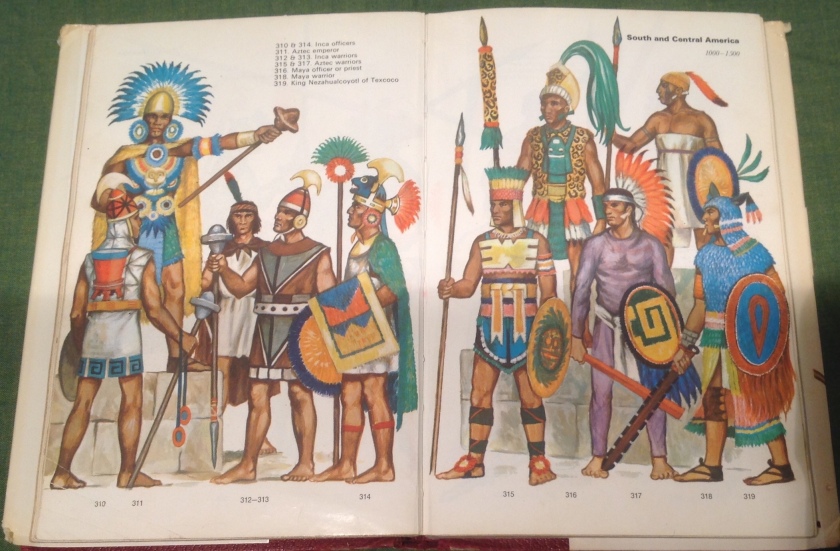 My first encounter with these exotic warriors was in Warriors and Weapons of Ancient Times by Nils Saxdorph. The short lived Peter Laing 15mm range of Aztec, Inca and Maya warriors came out a little too late for me in the 1980s to invest in this unknown period. Whilst they might all have been on the National Curriculum primary school world history from the early 1990s onwards, reduced to just the Mayans since 2014, we didn’t cover these ancient cultures when I was at school in the 1970s and 80s.

At some point soon these Meso-American Stone Age warriors with obsidian tipped blades will encounter these fierce Spanish Conquistadors with their crossbows, arquebus, war dogs and cavalry …

These Chintoys Spanish Conquistadors will also double up as opponents for my Elizabethan Spanish Armada era English / Cornish ‘Home Guard’ Muster coastwatch rabble (made up of converted Pound Store knights) and Trained Band (made up of old ECW plastics).

I like it when figures ranges overlap and have a dual use, it reduces the cost, time, painting and storage needed for skirmish games. It keeps it more in the spirit of my ‘Pound Store Plastic Warriors’ blog.

The Armada seamen will be converted and painted up from China made cheap seaside pirates, so whilst Chintoys are not cheap Pound Store figures, many of the other plastic figures will be Pound Store or cheap seaside plastic toy figures.

Wearing my Imagi-Nations hat (you can imagine yourself what this might look like) these fierce warriors can stand in for Central and South Generican tribal warriors in my Bronte juvenilia inspired renaming of the world. Meso-Generican then …

I hope you have enjoyed seeing these fascinating colourful figures as much as I enjoyed painting and converting them. Thanks again to Alan Gruber for sending them my way.

So there you go, that’s the Mixtapes …

Blog posted by Mark Man of TIN on this his Pound Store Plastic Warriors blog 27 November 2020.