Having spent time in the past converting OO / HO Airfix Japanese Infantry into Union or Confederate troops and zouaves,

I wondered how this sort of conversion would work at 1:32 or 54mm scale.

For paint scheme inspiration for the glossy toy soldier style, I looked to my books and my display cupboard.

I like the paint style on this Tradition of London solidcast Union infantry man, handpainted by a member of the Guild of Master Craftsmen,  a past Christmas present.

Other simple  paint inspiration can be found in these Britains, Tradition and Herald figures. 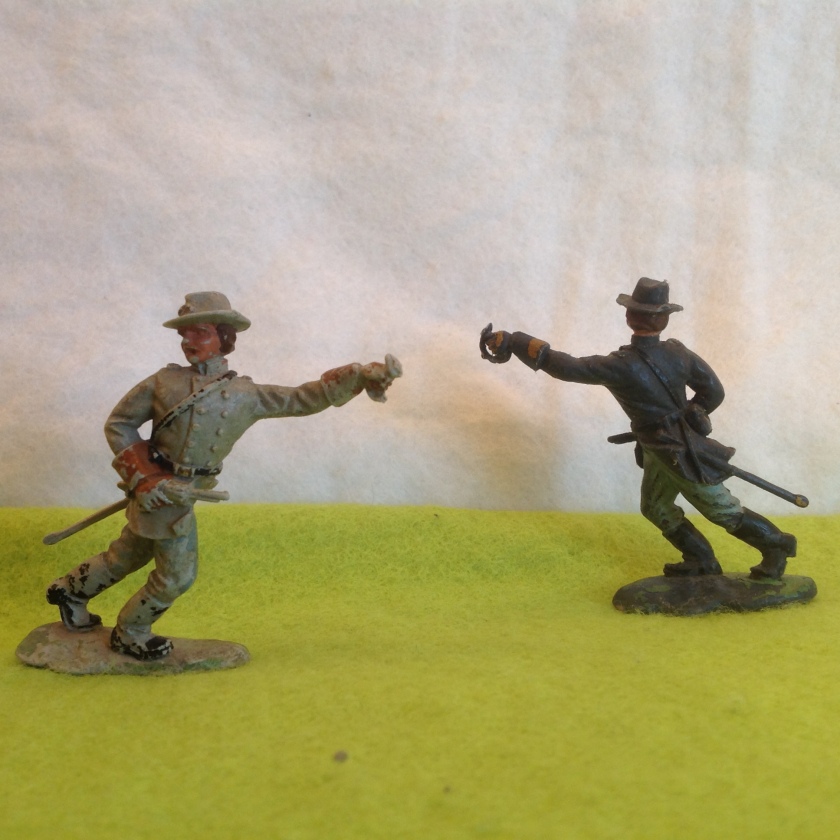 Other ACW figures in my collection came long ago from a quirky collectors shop in Cornwall.

Blogposted by Mark, Man of TIN on his Pound Store Plastic Warriors blog, May 2018

An online purchase last year from a vintage ex-shop stock supplier, at first I thought these were 54mm pirate copies. In fact they turned out to be OO/HO.

I was not disappointed as this meant I had some OO/HO copies of the larger Airfix Japanese Infantry to play with, pirated and pantographed down in size from 1:32.

Because of the unusual nature of these Airfix Japanese figures in a small scale,  I think that they are worth trimming free of flash  and painting up as an Imagi-Nations army unit.

Hopefully I will be able to create some interesting new OO/HO figures for the American Civil War or for an Imagi-Nations army, such as I have done with the original 1:32 Airfix Japanese Infantry that I have repainted here.

These Pippin fort figures were previously shown at my Man of TIN blog in June 2016 (link below here) and would feature well in the employ of any late 18th or 19th Century  Imagi-Nation: