As a pound store trash puppy (not a trash panda – that’s a raccoon), I keep an eye out for the changing packaging of the sort of pocket money cheap toy soldiers I collect and convert on this – the Pound Store Plastic Warriors blog.

With non essential retail closed during Lockdown, I keep an eye out online. 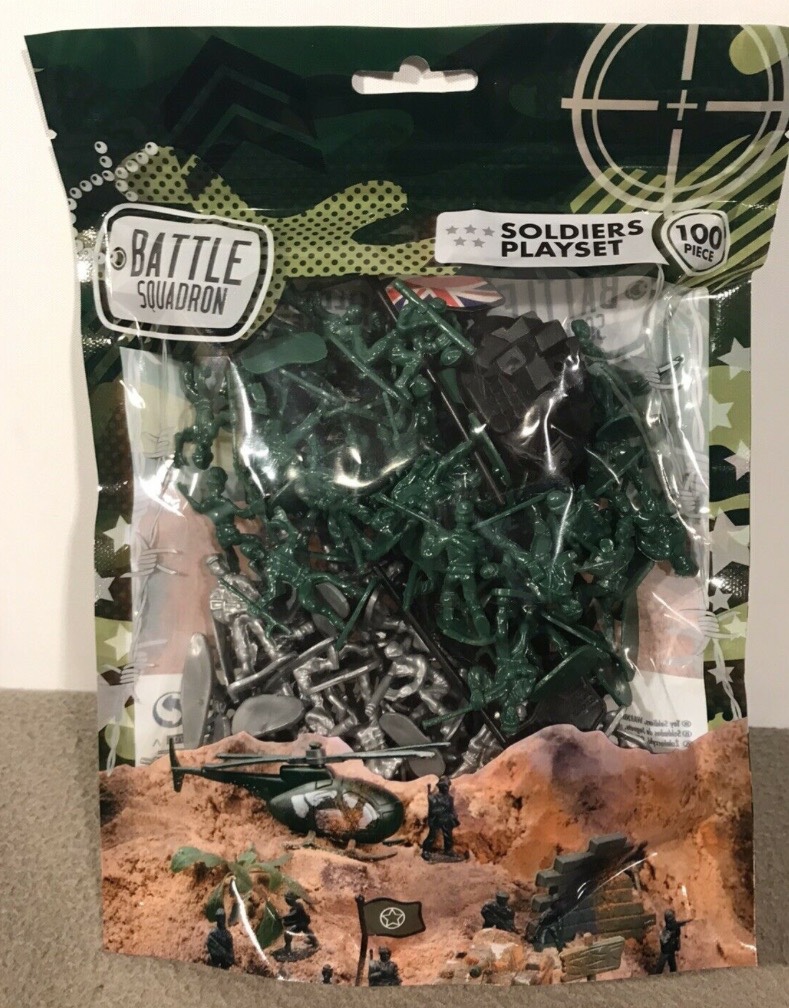 These pouches or bags might be from old boxes of such stock that eBay sellers are selling off, rather than anything brand new.

This battle sandpit illustration seems to have been redone from the Poundland runs or buckets of such troops, ones that I bought in early 2017 before the old pound coins were called in. Poundland cleverly continuing to take the old coins for longer than most.

I like the green flag with white line outline star. Each pack inside through appears to have one or two flags of the WW2 and postwar super powers – usually Germany, America, Britain, sometimes Russia. Oddly not China!

As a child I would have been a bit miffed with the depiction of typical plastic playset helicopters, tanks, walls etc on the packaging but then finding only figures and a flag inside.

Toy Buyer beware – not quite requiring the Trades Descriptions Act but always a little annoying. Was there ever a “Serving Suggestions” type get-out clause – “does not contain sand, walls or helicopter or nuts”?

On a practical play note the figure tub or stiff plastic ziplock pouch is a handy container for a child to keep these figures safe in, not as leaky as the old Airfix cardboard boxes. 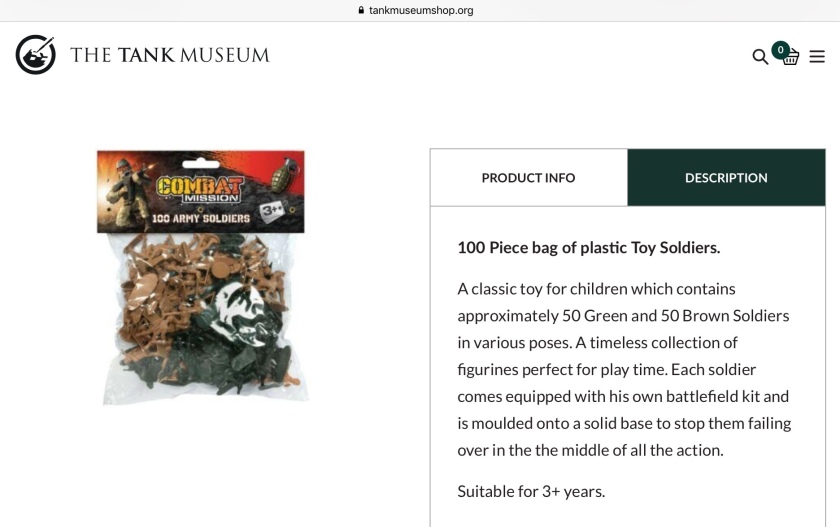 I like the Bovington Tank Museum online shop description of these figures which adds value to what others might see as disposable plastic: ” A classic toy … A timeless collection of figurines perfect for playtime. Each soldier comes equipped with his own battlefield kit and is moulded onto a solid base to stop them falling over in the middle of all the action.”

A reassuringly complete description that is, “classic … timeless … “each with his own battlefield kit”, like buying 100 tiny Action Men for £2, who don’t fall over and lose their “kit”.

These header illustrations are the poor cousins of the Airfix kit or figure box illustrations but with a certain rough excitement to them, promising to show you the inside contents of your head and your play world to which these clone Hong Kong copies are a cheap portal.

After Blue Planet II on TV, plastic is becomingly increasingly demonised from an environmental point of view as cheap and therefore throwaway disposable. We are rightly told that we now need to reduce, recycle and revalue our use of plastic.

We had no such public awareness about SUP (Single Use Plastic) when I was a child, although it all had to pass the non ‘single use plastic’ throwaway / ignorable, easily breakable, five second wonder toy test. Toys had to have proper “Play Value!”, as my Mum and Dad would say to guide me away from the more transient, flimsy, seasonal topical breakable trash of the toy shop.

These cherished plastics from the 1970s are still on display at home and sometimes appear in battle on my Tabletop, handled carefully now as some of the plastics are getting a little brittle. Indeed this makes them MUP Multiple Use Plastic or LUP Use Plastic.

At least for now, this brittleness is not such a worry with the freshly moulded, rough and tumble ‘play tough’ pound store plastics of today’s sandpit and Floor Games.

Maybe this is a side effect of growing up in the late Sixties or Early Seventies without colour TV and few colour picture books in infancy?

* “Shelfies” are reference pictures you take in a store if you are not buying everything you see.

I am amateurishly straying into the more organised serious plastic collecting, packaging and referencing territory of Hugh Walter’s Small Scale World and the Plastic Warrior magazine team. Writ the collection larger, you become Robert Opie of the Packaging Museum and his wonderful Scrapbooks, showcasing by decade and era his fascinating collection of ephemera. Robert Opie is the brother of the toy soldier collector and author James Opie, son of the folklore and playground rhyme collectors Iona and Peter Opie.

Me? I just find the colourful packaging and hyperbolic language and illustrations of passing interest.

The excellent Small Scale World blog by Hugh Walter and other plastic figure blogs like Stad’s Stuff are interesting because they feature not only lots of plastic soldiers, clones, pirates and novelties, but also show attractive ephemera such as the artwork and packaging.
In the spirit of this, I have photographed the Battle Squadron labels of these “tub o’soldiers” as my Poundland receipts described them.

The Poundland Battle Squadron figures (produced or imported by Funtastic) are shown on a interesting sandtable background with some typical poundstore figure set accessories that are sadly not included in the tub.

These accessories include  battle-torn wooden signs, a tank and / or helicopter, barbed wire and walls, which not being included could be  potentially annoying or confusing to purchasers.

Obviously you need to raid your own toybox and sandpit to supply your own plants, sand, accessories and imagination.

Smoke (the fog of war?)  or helicopter downdraught swirls in the background and what look like explosions are suggested – all  very dramatic, if not quite epic!

By the look of it, a green enemy soldier is glimpsed bottom left of the Army Silver Grey or Germans to give an idea of how to play – buy more tubs of different coloured figures for the ‘Epic Battles’ promised on the label!

There is a certain bold Heinz Soup-ness to the label design which I like.

The different nationalities are given different colours – Army Red or American, Army Green or British and Army Silver / Grey or German.

Each label and lid shows the appropriate coloured infantry inside and a different front label with different picture for each coloured army.

The Army Green or British forces are pictured with a helicopter, the tank and battle-bashed noticeboard not provided – raid the toybox for these.

A flag to defend is helpfully included. Defend the flag!

The most puzzling figure colour choice is the Army Red or Americans. Arguably red is part of the American flag, but maybe it is supposed to be a sort of brown camouflage? Tan would have been another suitable plastic soldier standby colour familiar from the Toy Army Men standard contrasting colours of Green and Tan.

I imagine in other parts of the world in their versions of pound or dollar stores they are differently flagged and packaged to suit local conditions. Something to watch out for whilst web-surfing …

The American or Red Army troops (hang on, isn’t Red normally Russians?) are pictured with hovering helicopter (not included).

The back of the tub label has the excitable  text backed up in Spanish, presumably because they are sold through Poundland stores (known as Dealz)  in Spain where a Pound is really 1.50 Euros. Doesn’t have the same ring somehow, popping out to 1.50 Euroland!

Blogposted by Mark, Man of TIN for the Pound Store Plastic Warriors Blog.