It’s been a week or two since I started this skirmish game and today I had the chance to conclude the final moves.

The story or scenario so far of my 1:1 skirmish game using pound store plastic warriors converted into colonial infantry and natives – photos and blogpost 1

The native spearmen attacking from the ridge on the right had done serious damage to the numbers of Redcoats relieving the Gatehouse patrol.

It was fairly obvious that the Redcoats would be unable to hold out at the Gatehouse to the Pass for long against the massed native rifles on the ridge. 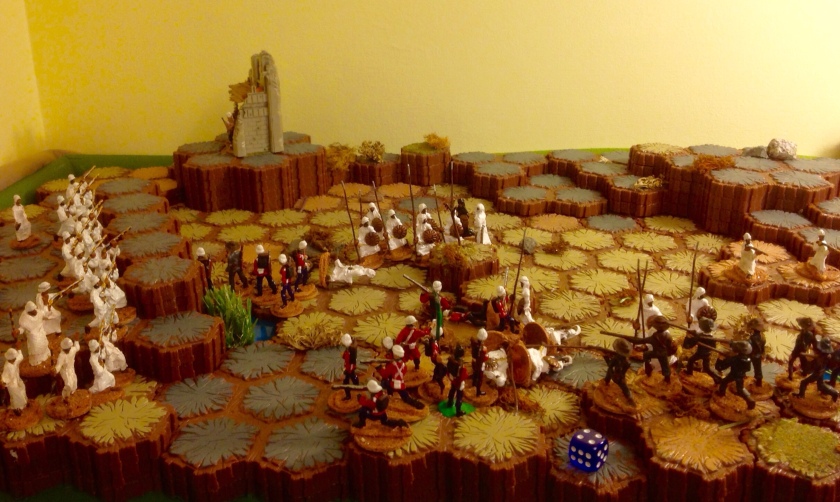 Once most of the native spearmen had been dealt with, the cleverest solution for the Redcoats was to run for cover beneath the ridge that the native riflemen were on or remain across the other side of the valley beyond rifle range. 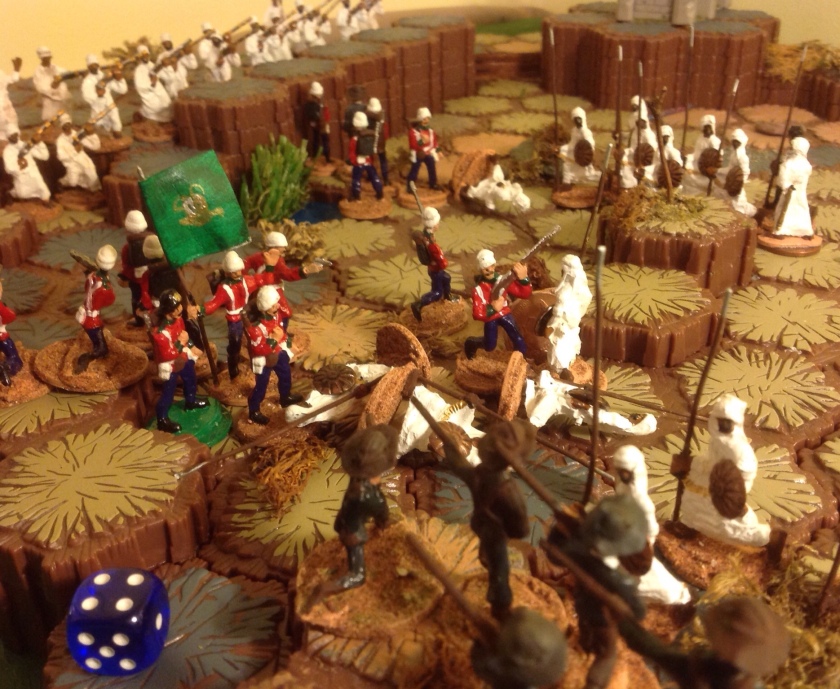 By Turn 6, many of the Redcoat troops had perished in the melee fighting against the Native Spearmen, leaving mostly the militia rifles to attempt to reinforce or rescue the Highlander patrol at the ruined Gatehouse. 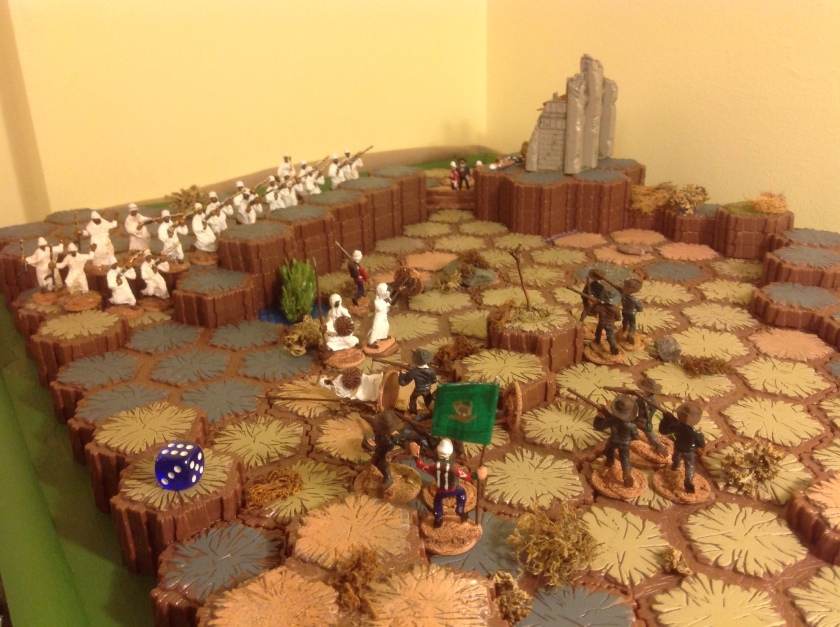 Turning the gaming board round to get my painting seat back in action, this time we are looking from the native rifle positions on the left ridge down the valley. 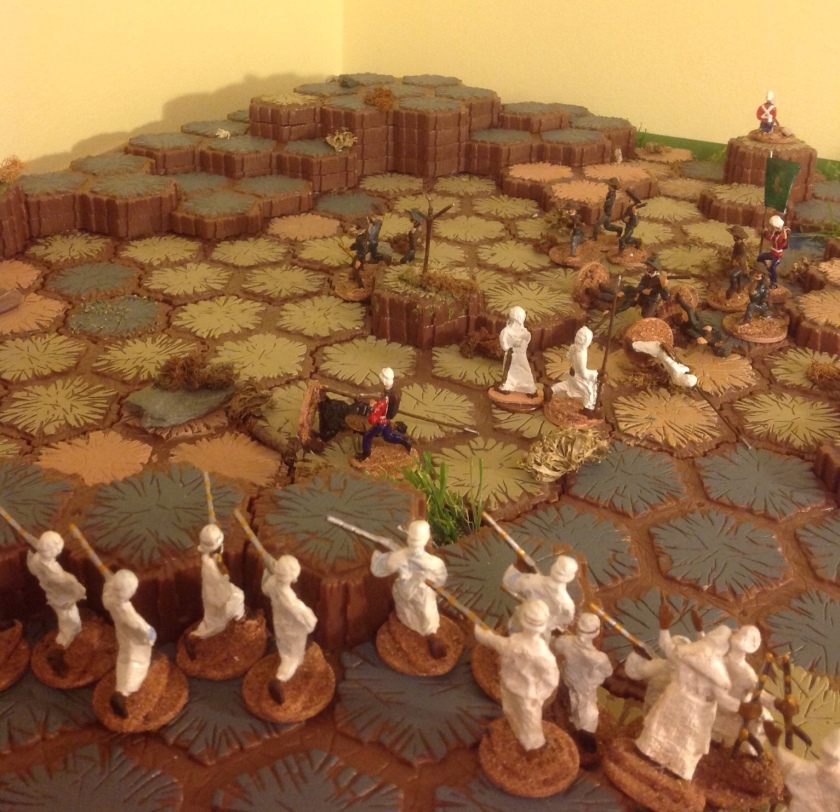 Turn 7 to 11 saw the Militia and remaining Redcoats reach the Gatehouse. Several Native Riflemen left the ridge to attempt to cut off the retreat of the Militia but were fought off in melee.

Redcoat orders: What to do on this confused situation with so few men?

A d6 dice roll sorted this out. 1-3 retreat, 4 occupy Gatehouse or 5-6 attack the native ridge.

The Redcoats and Militia rolled to retreat, aiming to return with reinforcements. They remained below the ridge or out of rifle range. Their flag or colours were safe. 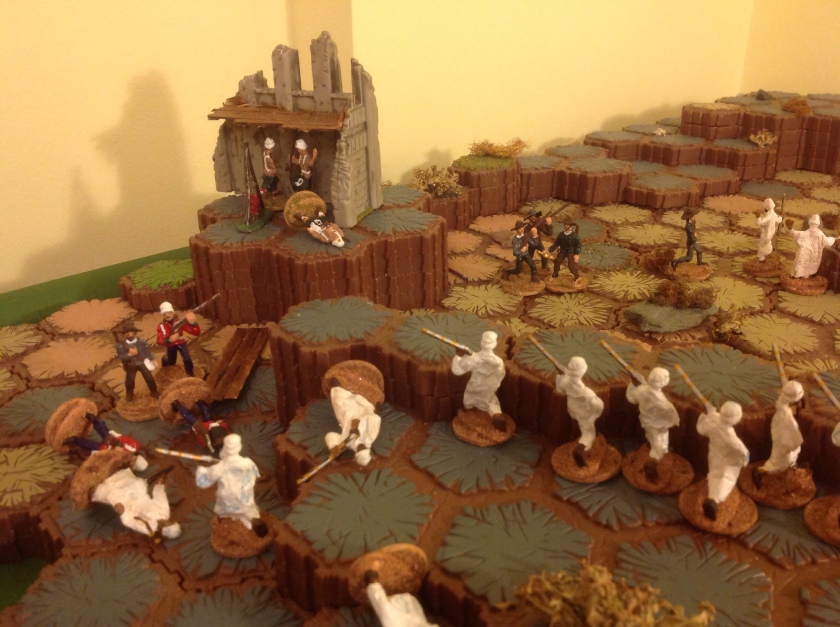 The Redcoats and Militia retreat out of rifle range. 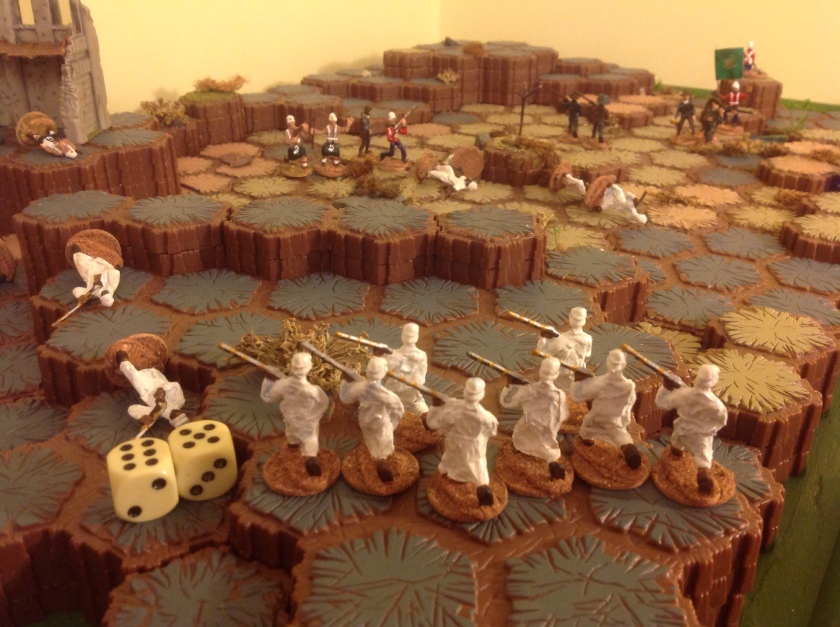 The surviving Redcoats, rescued Highlanders from the Gatepost and the Militia halt out of rifle range. The heliograph operator flashes back a request for reinforcements. 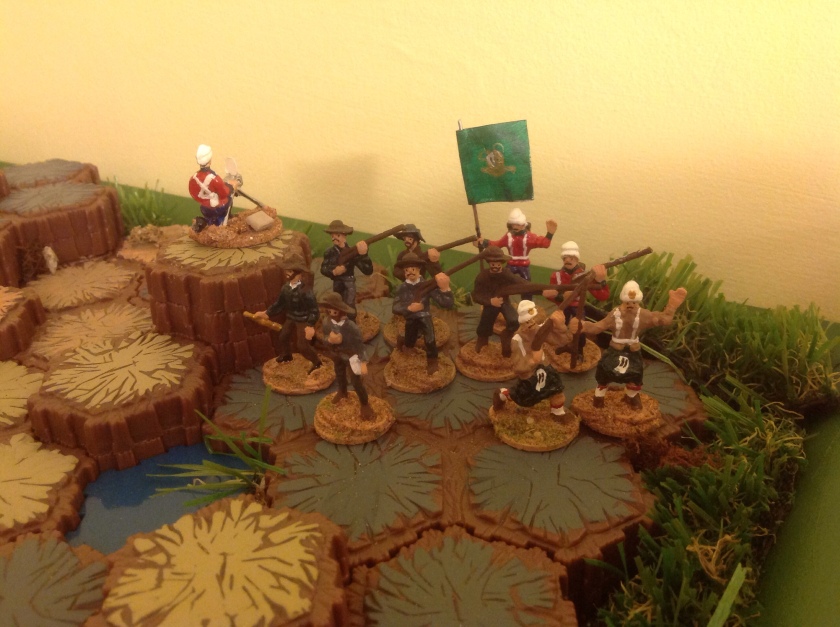 Likewise the natives rolled for their next action and also retreated, melting away from the ridge to watch from the hills. 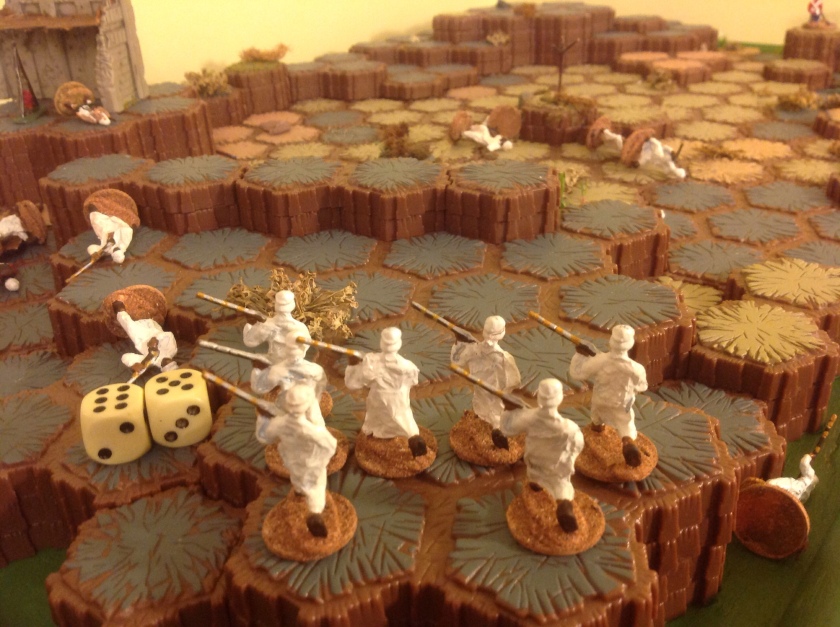 A most satisfactory game, albeit a game that soon proved unwinnable for the Redcoats after the heavy losses against the native spearmen. It proved interesting enough despite being shelved twice, played over three short occasions, all part of the convenience of a portable game board and of solo gaming.

It was a joy to finally be handling figures that I had been converting and painting for many previous weeks. It was the good looking game I had been working towards and envisaged. I liked the Old School / Featherstone / Wells look of the game and of the rugged desert Heroscape Hex terrain. 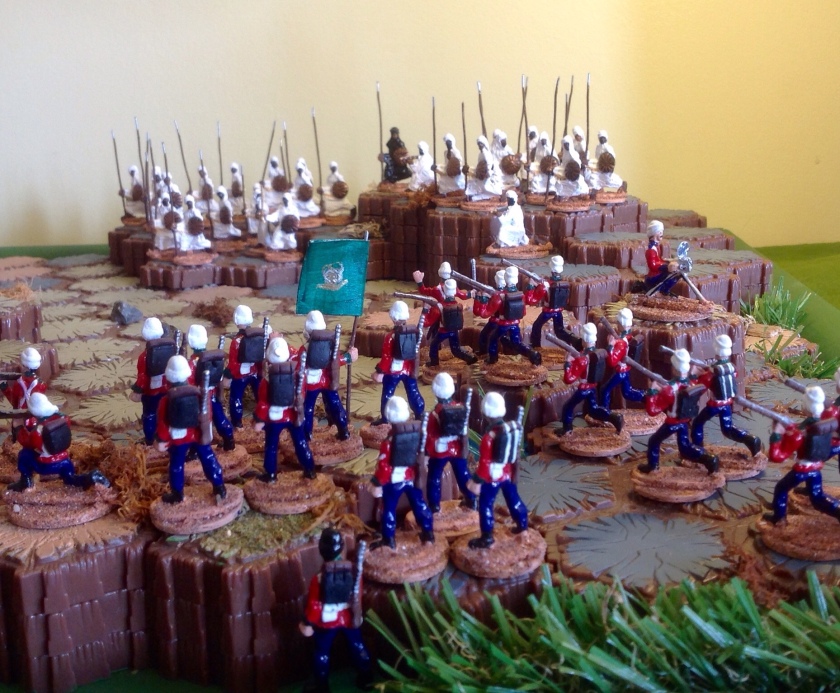 I have been working on these figures for many weeks and finally it was a chance to use them on my 192 Hexes of Joy game board, complete with extra added pink deserty Hexes.

Somewhere in the foothills of Generica, a patrol is overdue. 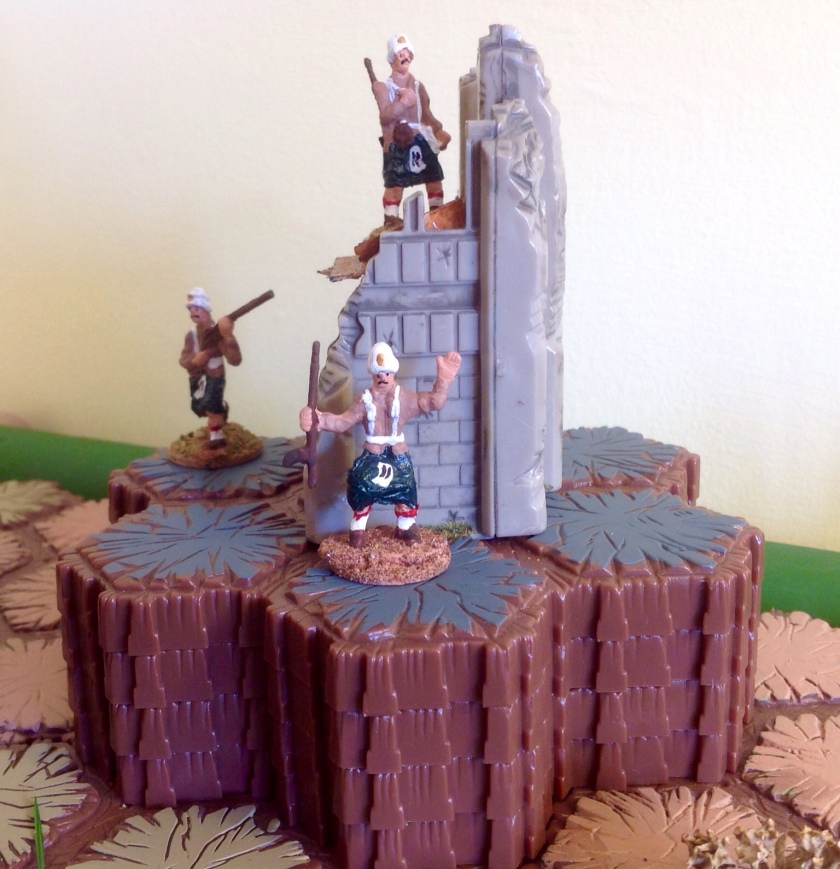 The initial dispositions are shown below, a Redcoat column marching up the valley to rescue the missing Patrol of the 3rd (Foot and Mouth) Highlanders, who were camped at the old gatehouse in the Pass.

Either side on the high ground of the valley are amassed Generican desert Warriors with rifles (bottom left) or long spears and shields (top right). 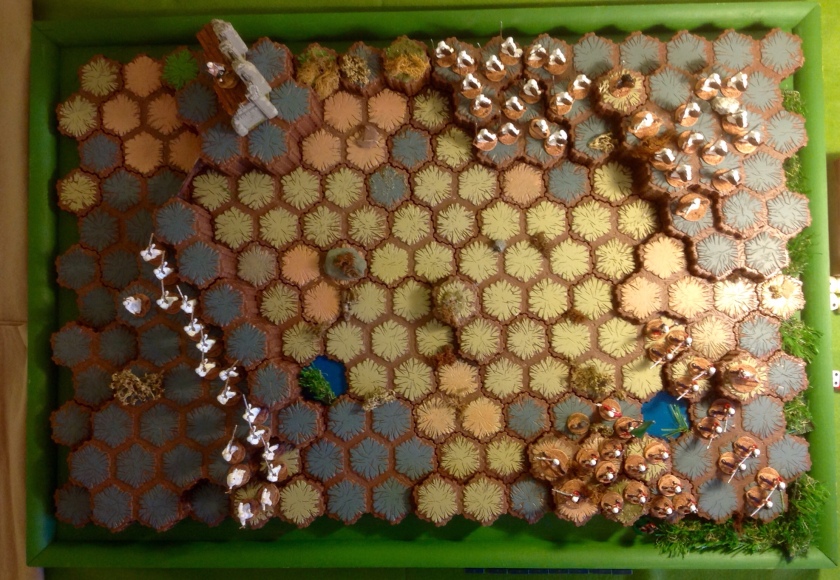 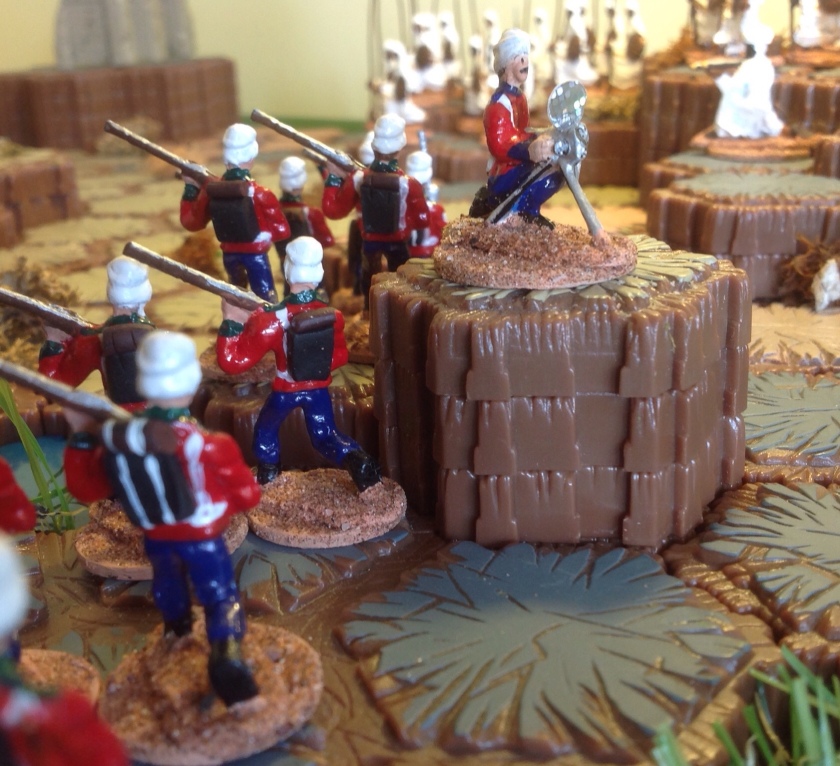 A heliograph operator flashes back information, summoning reinforcements. The Redcoats look to be outnumbered! 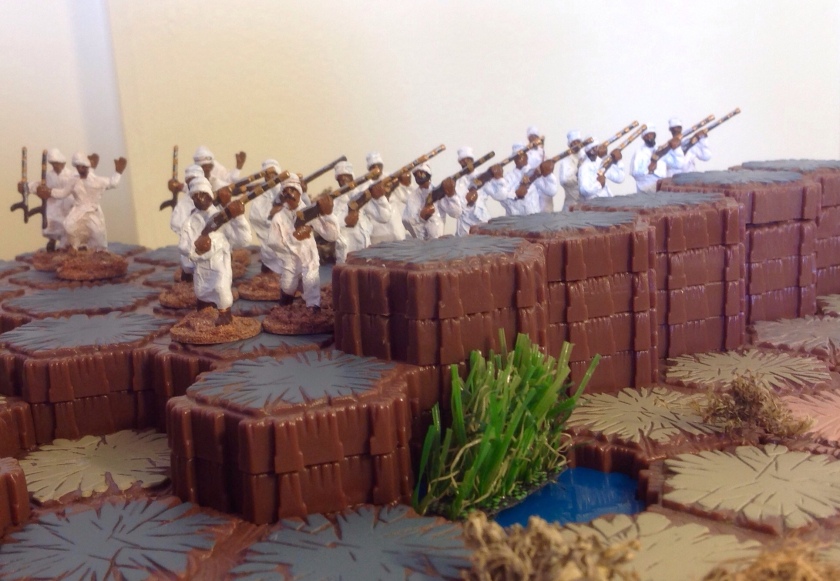 Will any reinforcements arrive in time? A slouch hatted company of local Militia are in Reserve nearby.

Will Private Widdle and the other 3rd Foot and Mouth Highlanders be rescued and the Pass held?

Being bunched up by the terrain, the first few volleys from the Redcoats were ineffectual before the Generican spearmen charged down the right hand Valley slopes into melee. With no savings throws, the initial casualties were high for both sides. Fixed bayonets met sword and shield. The Redcoat officer, leading from the front sword in hand, was soon downed.

Luckily, the d6 was rolled for when the Redcoat reinforcements of rifle militia would arrive in game turns. They rolled a two, so soon more rifles and boots on the ground will be stomping up the valley.

The following blogpost  part 2 shows  the conclusion of the skirmish:

Rules are my hexed up Close Little Wars, some of the simplest Donald Featherstone rules designed for natives and troops in cluttered terrain, originally in North American forests but here used in rocky desert. The cluttered terrain is made up of Heroscape hex tiles, now many percent extra deserty with the help of some painted Hexes! 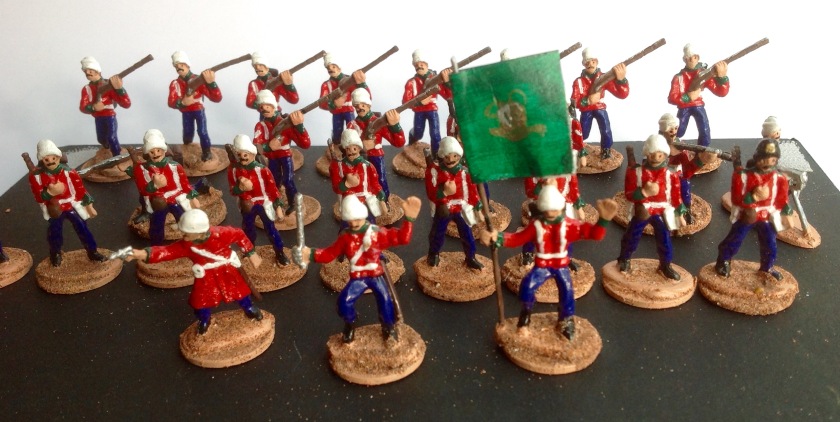 My latest pound store plastic warriors conversion project has been rapidly painting some Colonial redcoat infantry as  opposition for the desert or hill native warriors that I finished in October.

The Man of TIN has been stricken with slight Man of TIN flu of late, which has delayed work on my blog and my latest figure conversions.

I wanted to try something different with these cheap “penny dreadful” 36mm plastic figures which are currently available online or from Poundland  (at £1 for 100).

These ‘brave’ desert warriors needed some opposition, starting out with the same fairly unprepossessing starter figures.

Some of these 36 mm figures have simply been painted as Redcoat infantry and have had Fimo backpacks and blanket rolls added.

Other figures have had more conversion work  by scalpel such as the officer figure with his rifle cut into a sword and a Fimo scabbard added. A similar posed figure had the rifle removed and the hand drilled to take a piece of wire to make him into a flag or standard bearer.

Before I tried these command figure conversions, I also added as ‘officer material’ a 30mm-ish WW2 US officer (an old Matchbox China made pound store clone) firing a revolver or pistol in his greatcoat. A thin Fimo scabbard was added. 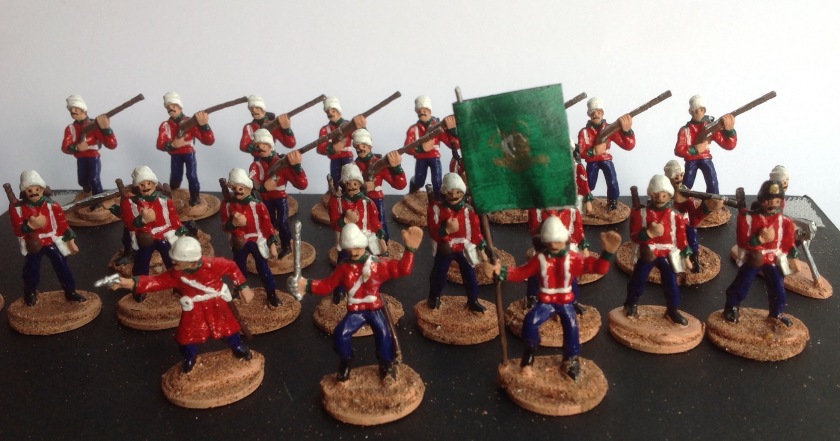 A gloss toy soldier look was wanted, so Artist or Revell Model Acrylics were used. Uniformity of moustache was also needed, eyes dotted in with a pin and a very thin brown acrylic wash to add some definition to the faces.

I may well add a pinprick pink dot on each cheek to keep that toy soldier look as I did recently on my 42mm pound store toy soldier style paintwork.

There is still some tidying up to do, a few straps to add and the inevitable varnishing, but these red coated troops should soon be ready for action dodging ambush by hill warriors.

Any slight resemblance to Zulu War Redcoat British  infantry is entirely deliberate, although with such modern figures as starting material, it is only going to be a suggestion.

For uniform  inspiration I had by me some  childhood books, namely an old Osprey Men At Arms book on ‘The Zulu War’, Preben Kannik’s Military Uniforms of the World in Colour  and my trusty Ladybird ‘Soldiers’ book.

(Good job I noticed the mistyping as Military Unicorns of the World in Colour – what a book that would be. What a great cavalry regiment or regimental mascot!)

Amongst the other figures can be glimpsed a kneeling modern machine gunner who has had his Heavy Machine Gun cut down to make that start of a Heliograph for signalling. Still needs a reflector disc. A kneeling bazooka man had his bazooka clumsily removed by hot scalpel and a wooden rifle added instead.

The hot scalpel or hot knife technique, warming a blade in a candle flame is not recommended indoors, plastic figures like these give off unpleasant fumes when selectively melted.

A quick dip into Preben Kannik’s Military Uniforms of The World in Colour suggested another figure conversion. It must have been the floppy hat that caught my attention.

Further opposition for the redcoated British style infantry is now underway on the painting table, with some simple headgear conversions or additions. A couple of those old fashioned hole reinforcers, stripped off an old cardboard label, proved a suitable hat brim, further trimmed down once glued in place.

These should make suitable Boer Commandos or Confederates. There is a farmboy or cowboy look to both figures. Lots of figures are suggested by this simple hat brim addition – US Rough Rider infantry from the 1890s / 1900s, Confederate or Union infantry.

It might even be possible to turn a brim up on one side for that bush hat, slouch hat or smart City Imperial Volunteers ‘titfer’ look.

Sadly most office hole punchers make  too large a hole for the head of a 36mm Poundland figure. So if you run out of suitable scrounged small parcel label hole reinforcers, use one as a rough template to cut out new ones from scraps of watercolour paper.  Fiddly work but folding the tiny card circle in half means you can cut a rough inner circle. A little bushhat bashing or distressing is then required.

Reinforcements for the Thin Red Line

The Preben Kannik book also has a good kilted khaki Highlander – a conversion I am working on, using a kilt made of a thin strip of tissue paper and PVA.

The main inspiration for this variously khaki or Redcoat highland unit is mostly one of my favourite films Carry On Up The Khyber, being the infamous 3rd Foot and Mouth (Highland) Regiment, those ‘Devils in Skirts’.

The battle scenes are quite impressive, if you ignore the slapstick bits. A great inspiration to any tongue in cheek Colonial gamer.

Some great uniform inspiration photographs here at the IMDB website and also the Carry On UK site.

This 1968 comedy remains to this day my favourite of the many Carry On films. There is still much to like about  this (now very un-PC?) pantomime satire on colonialism and the heroics of 1960s war films like Zulu; I like the fact that this freezing Khyber Pass was filmed in exotic Snowdonia in North Wales.   http://carryon.org.uk/gallery/thumbnails.php?album=31

So off to paint Another Thin Red Line, or Thin Khaki Line with Kilts, hopefully not as painted by one Private James (Jimmy) Widdle. Bliss …

Blog posted on my Pound Store Plastic Soldiers by Mark, Man of TIN blog, 25 November 2017.  (Apologies for the dim photographs, I was photographing figures in natural but dimming light.)