Crossposted on 30 October 2020 from my Man of TIN main blog for you to enjoy!

What’s on the painting table at the moment?

Things have gone a bit 16th century here at Man of TIN Towers, thanks to the gift from Alan Duchy of Tradgardland Gruber of a handful of surplus 54mm Mixtec, Zapotecs and Conquistador figures (Chintoys). These are perfect for more Close Wars forest fighting amongst the forest trees. These figures are all steadily gaining bright shiny toy soldier gloss colours on the painting table.

Reading around the times I realised that a bunch of Conquistador Spanish could have several opponents, not least the Late Elizabethan Tudors.

The planned land invasions of the Spanish Armada of 1588 and the Spanish Raids on the West Country in the 1590s both had ‘skirmish’ potential of a relatively small handful of infantry or cavalry figures.

I have done a bit of quick reading around the Tudors, not least in a reprint of A.L. Rowse’s Tudor Cornwall (1941), written when Britain’s shores were again threatened by a different enemy. Rowse makes direct comparison of the late Tudor Cornish forces to the hastily improvised coastal defences and the squabbles and politics of the Home Guard, the WW2 equivalent to the ‘Muster’ and ‘Trained Bands’ in each County during the Spanish Armada invasion scares.

Could I put forth an Elizabethan equivalent of Captain Mainwaring’s platoon in Dad’s Army?

I must admit to some personal interest in this period and era as I can trace Cornish ancestry on one side of the family back to the West Penwith area of the Spanish Raids in the 1500s. Odd to think my farming ancestors may have seen the Armada ships and signal beacons along the Cornish coast, heard tell of the Spanish landings and town burnings of Paul, Nelwyn, Mousehole and Penzance or even mustered in motley defence of their local coastal towns.

How best and cost effectively to put together an unfurnished or ill equipped Muster of Cornishmen to oppose these Spanish invaders?

My answer is to convert cheap plastic knights and medievals with paint, scalpel and masking tape. But what should they look like, wear and carry as weapons?

Unfortunately I know from a thread on the Little Wars Revisited 54mm forum that figures or spare recast heads with Tudor caps and Morions seem hard to find. Short of buying the Prince August Spanish Armada homecast chess set moulds, a little plastic conversion might be needed to make a poorly armed rabble.

Finding uniform information about ordinary Elizabethan Tudor soldiers, especially the local Muster, is a bit of a challenge. Only the better off commanders seem to have have left their portraits and images of their rich and fashionable clothes behind, not the ordinary West Country man.

Fortunately I did track down through EBay and second hand books shops the Osprey Elite book on the Spanish Armada and The Bluecoats: Clothing the Elizabethan Soldier 1572-1603 by David Evans. Along with a useful Academia / jstor article by John S. Nolan on The Muster of 1588, I was getting more of a picture of what ordinary Tudor levy and Muster troops would wear and what weapons they would carry.

During the Armada scare of 1588, bows and polearms were still carried by the Muster whereas the Trained Bands were more likely to carry pike and firearms such as an arquebus, caliver or early heavy musket.

By the 1590s Spanish Raids, fewer bows were evident in the national defence but then in the furthest poorest reaches of the West Country, bows and polearms would still have been around in good number. Training and weapons drill varied greatly across each county.

Many of the Levy troops to fight the wars in Ireland and the Muster and Trained Bands of the Armadas period seem to have been issued with blue Cassocks, tabards or coats. Some of them were in a lighter blue colour called Watchet Blue named after the town in Somerset. Most of the Muster would have worn their everyday working clothes and carried farming implements, much like the early Home Guard or LDV in WW2 parading before uniforms were issued. 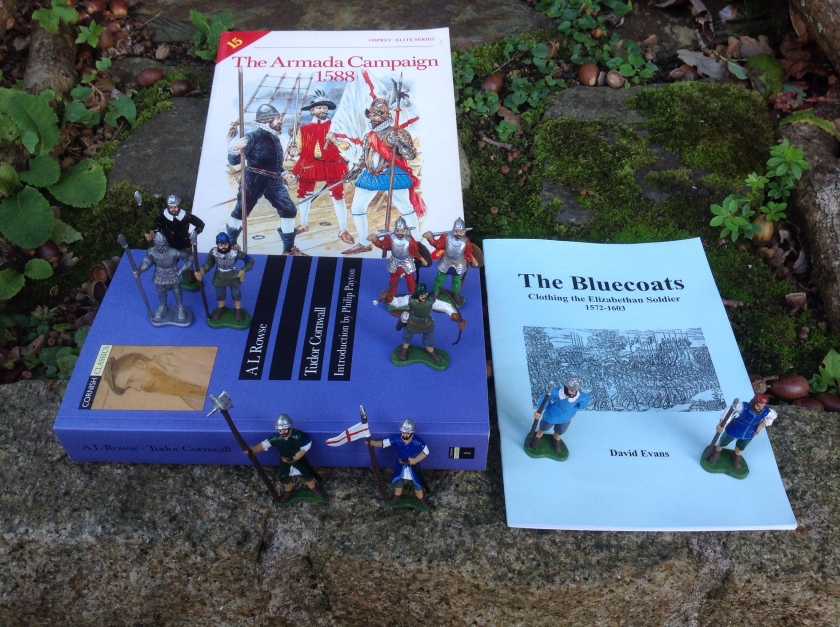 Some of these medieval figures needed repair, changing a broken spear into a poleaxe for example using wire and plastic card. I want to give the impression that old equipment like a rusty old corselet breastplate or a metal skullcap has been dug out of cupboards and chests and hastily burnished up for the occasion.

A handful of English Civil War musketeers and Pikemen, drummers and standard bearers in my rummage box of figures should do double duty or dual use as the Trained Bands of the late Elizabethan era and also as ECW troops – only 50 years apart.

An interesting period of history and an intriguing Elizabethan Operation Sealion “what if” scenario of what if the Spanish had landed in force during the 1580s and 1590s.

Now a dozen or two more motley archers, men at arms and medieval types to convert from plastic still to see of those pesky Spaniards …