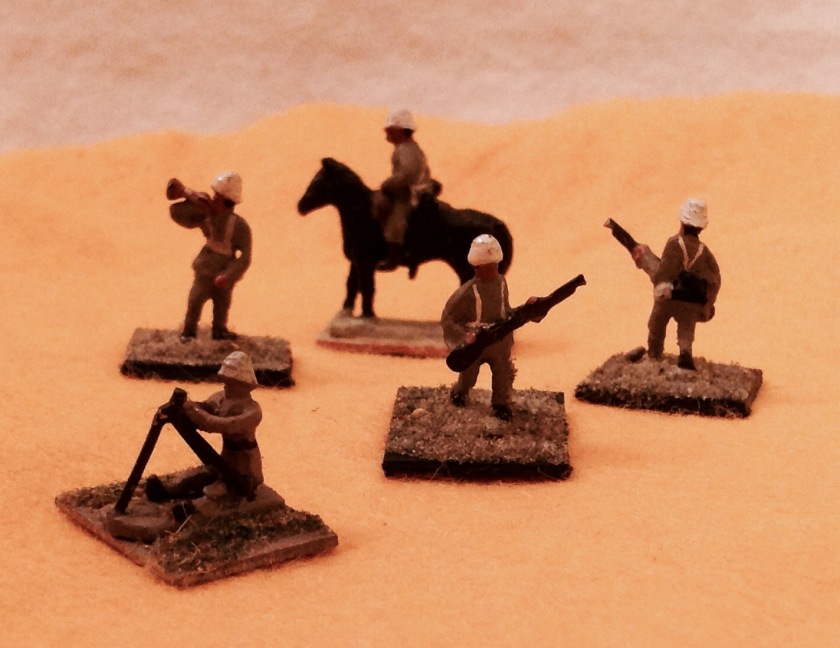 One of my recent boycraft or mancraft projects has been  scratch building a desert or coastal signal fort in toy soldier fort style using a wooden Christmas clementines box and a Hobbycraft papier-mâché castle tower.

Trying this out, it was a tight squeeze to build the balsa walkways around the tower base but it struck me that this could be some kind of defendable lighthouse, watchtower or semaphore station.

As I played around fitting the balsa walkways around the tower base  it struck me that this could be some kind of defendable lighthouse, watchtower or semaphore station.

But what would a semaphore station in the 19th century look like?

I thought a semaphore station or telegraph Beacon would be something worth defending or attacking, so well worth the defensive features. This would form part of the colonial or trading infrastructure, the information superhighway of the 19th Century. Something that would suit a coastal or desert location.

Shoot the guy with the Flags!

Men with flags standing in prominent places to be easily seen were obviously very vulnerable to sniper fire. A mechanical replacement of human arms was obviously sensible until morse code,  telegraph wires and eventually radio took over the role.

There are some interesting articles on the web on Military semaphore and signalling from the late Napoleonic era through to mid Victorian era, although mechanical flags were first suggested by Robert Hooke in the 1680s!

Another design looked much more like my type of coffee stirrer and balsa wood construction.

As a challenge I added double ends to the indicator boards.  There is a link between the military semaphore and the clunk-y indicator board railway signalling developing from the 1830s and 1840s as the telegraph wires along the railroad began to replace semaphore systems as this new comms network developed.

In the Napoleonic Wars, Britain was aware of what the French had achieved in the Chappe system of setting up semaphore stations. The Royal Navy Channel Fleet blockading Brest must have aware of the significance of the signalling tower they could see on the hilltop at Petit Minou.  C.S. Forester writes in Hornblower and the Hotspur:

“Automatically, Hornblower looked over again at the Petit Minou. As he expected, the semaphore arms of the telegraph on the cliffs at the point there were swinging jerkily, from vertical to horizontal and back again. The watchers there were signalling to the French fleet the news of the arrival of this fourth ship to join the inshore squadron; even the smallest activity was noted and reported, so that in clear weather the French admiral was informed within minutes. It was an intolerable nuisance …”

Eventually, Hornblower leads a landing party to deal with the “nuisance”, which would make a great gaming scenario http://www.johnhearfield.com/Radar/Chappe.htm 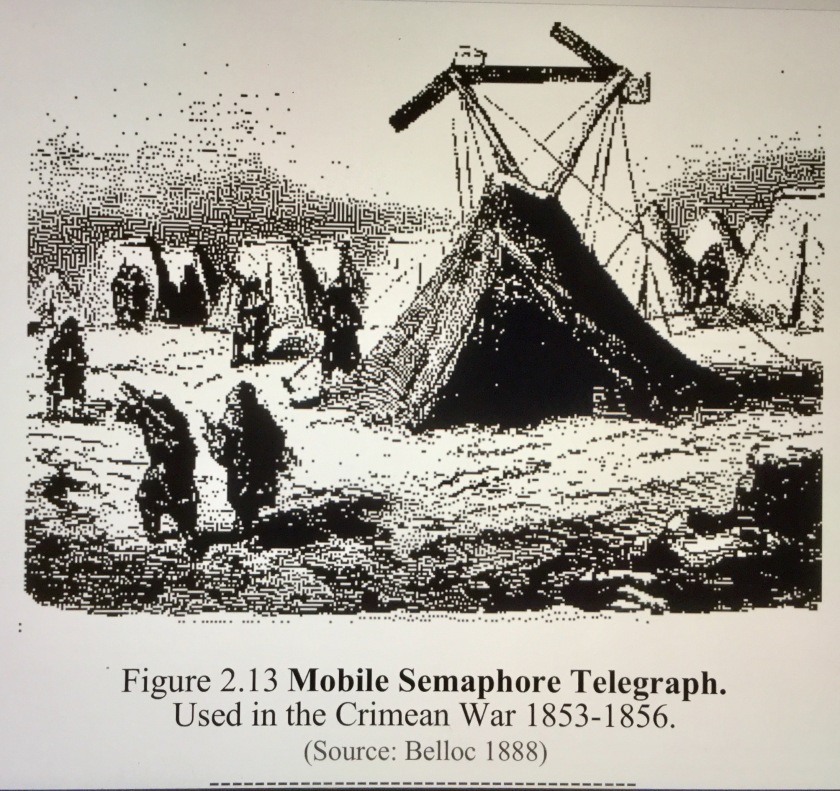 A mobile tented semaphore station in the Crimean War is shown (Belloc 1888) in Jones Early History of Data Networka.

I have based my semaphore station on the British Popham system shown here http://www.vauxhallandkennington.org.uk/telegraph.shtml

Popham’s 1801 naval  flag system of numbers indicated words encoded in a code book (here transcribed by a Peter Ball from originals in the National Maritime Museum) – this is a great idea if you have limited number of indicator positions such as 1 to 9 or even 1 to 4.

http://www.goblinrevolution.org/widgets/popham_encoder.cgi allows you to encode / translate  these messages online in flags !

This website covers many systems including the US army Wigwag symbols of flags or lights at night invented by Albert Myer and adopted by the US Army circa 1860 throughout the American Civil War up until 1912. A two flag system was also

https://en.m.wikipedia.org/wiki/Signal_Corps_in_the_American_Civil_War is a fascinating article especially when balloons, signal flags, steam trains and telegraph were all deployed around the same time.

A beautifully modelled signal tower can be seen at this blogpost:

The twin squares flags can be seen on the Signals memorial at Little Round Top, Battle of  Gettysburg site.

The  “flag,  flash and read” system of flag, heliograph and telescope Zulu War 1879 also in this Royal Signals website.

I have a couple of useful signaller figures, two Airfix sets – the OO/HO and 1:32 WW2 German Mountain Infantry and OO/HO WW1 British Infantry – in both the  flags are very fragile, even in the 1:32 German Mountain troop scale.

Any officer with binoculars or telescope (such as the Airfix WW1 French Infantry HO/OO signaller lying down with telescope) is useful as the “Glassman”. This was one or two men in the four or five man semaphore team, whose job is to be looking backwards and forwards to the next signal tower to check if the message has been received. If all else fails, the French signaller with homing pigeons would be useful.

Someone else had to physically change or alter the signal, and someone to note down the message if it is to be coded or decoded. Jobs were interchangeable. The large number of staff were required in the not very far spaced apart stations meant this expensive system could only really be maintained night and day year round in wartime.

As the British Popham system came in from Naval use and flag systems, often serving or former Navy staff were employed. In the field, Royal Engineers or Signals Officers and troops would be used.

The Prince August cowboy Homecast figures in 40mm look very similar to these US Signal troops wearing their cowboy or stetson bush hat. Here is the crew for the tower and its small garrison. I shall have to make a Heliograph apparatus for them.

Heliograph teams were once cutting edge technology, appearing in H.G. Wells’ War of the Worlds (1898) for signalling information about the Martian invasion.

Heliographs survived in service throughout the Boer War and longer into the WW1 and WW2 period especially in desert situations, slowly replaced as radio communication to pass on Morse  Code arrived. They were still in use by insurgent forces in Afghanistan in 2001.

Signalling distances of 80 to 100 miles were apparently possible in clear weather!

There is more about the Heliograph on the British Army Royal Signals website.

In the case of the Turkish forces pictured, a signal lamp is also included, a signaller with telescope and one writing down messages. Interesting grouping for a gamer or modeller and a similar desert uniform to the Victorian British in 1879 and the Second Boer War.

A naval version of flashed torch signals with Alldis lamps survives between ships until today, including infra red versions, along with a version for air traffic control to communicate with planes if radio contact is lost .  https://en.m.wikipedia.org/wiki/Signal_lamp

Again you realise how vulnerable these Signals crews to sniping, hence the safety of the signalling Fort with mechanical arms. Once again, well aimed artillery fire could damage this tower or equipment.

All this is interesting source material as games scenarios for my Desert or Coastal Signalling Fort / Lighthouse, along with plenty of ideas for modelling conversions of suitable pound store cowboy figures and home cast figures or lead hollowcast repairs and conversions.

My only Heliograph figures are Peter Laing Colonial British in 15mm, one of whom I have crudely converted to a war photographer. This could easily stand in for a signal lamp. Pictures from my Man of TIN blog

The pilot project partly failed for many reasons including when London Pigeons and passing birds kept interrupting the data flow.

I got some great views of London as a child from these tower tops “going to work” on Saturdays  with my Dad, including the Lord Mayors Procession far below from the top of a tower block.

Blogposted on Pound Store Plstic Warriors by Mark, Man of TIn blog, May 2017.