Found this on my travels in a National Trust gift shop for the not strictly pound store price of £4.50 (but hey it’s for charity). Pound store bizarreness and  quality though!

It is available online too https://shop.nationaltrust.org.uk

The calves are small enough to be cows in a smaller railway or gaming scale.

The piglets are pleasingly stocky and wild boar like (lunch for Obelix and Asterix).

The rabbits (?!?)  are just plain bizarre. The chickens and ducks repainted are good for farm vignettes.

What I find most fascinating are the cloned farm figures which are in that indeterminate 40 to almost 50mm sizing. They are in slightly soft plastic, rather than hard and brittle.

I think the figures will repaint well enough for civilian figures, as will the outhouse repainted to a small distressed farm outhouse. It is a clone of Britain’s Plastic small farm buildings that I still have.

The Mini Farm set is manufactured by www.keycraft.eu, an interesting low cost plastic toy trade retailer with lots of business retail insights on their website. The Sceince of Impulse Buys? Note:  Trade only. 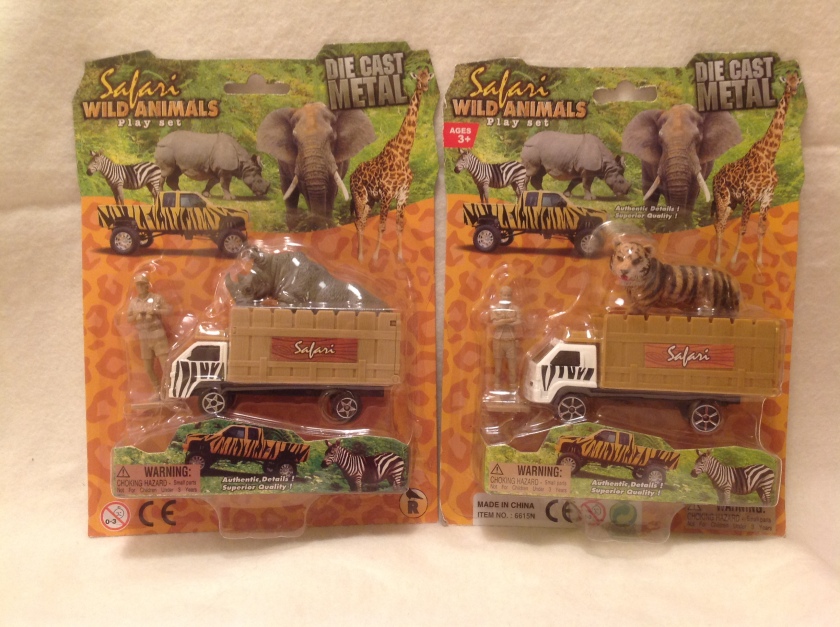 The usual mix of scales of figures and vehicles can be annoying to some but is full of potential across a range of scales.

These were a useful set of civilian or military safari or zoo figures that I got at a discount, not Pound store materials but certainly useful plastic figures and lorries to accompany some of my Pound Store Plastic  conversions.

Ross Macfarlane of The Battle Game of the Month blog wondered what my Pound Store version of my #FEMbruary challenge might be?

Interesting ideas – not sure what #FEMbruary Pound Store figure conversion I might attempt yet.

Looking back through this blog there are a fair number of female plastic figures ranging from pirates to space princesses, pioneer women and native Americans, zoo staff and visitors, to police officers.

What female gaming figures might you paint up or convert for #FEMbruary?

The FEMBruary challenge seems to have started at the Leadballoonery blog.

Blogposted by Mark Man of TIN on 9th FEMbruary 2018

Trying to to find interesting 54mm civilian figures is always a challenge. Apart from an unusual set ordered online from China, it usually involves looking out for figures with playsets or vehicles. An expensive way to acquire a few figures!

Britains and other companies used to make civilian and railway figures in 54mm lead but few in plastic, the occasional keeper figure or farm worker.

It was always frustrating as a child to have a zoo or farm or a parade set out but no visitors  to watch; it usually resulted in lots of  troops parading (H.G. Wells Floor Games style) endlessly  through the zoo along with assorted military staff feeding the animals.

Military bands and other forms of entertainment and display were not unknown in the Victorian zoo and right through to Manchester’s Belle Vue Zoo into the 1950s. Whilst military mascots ended up in zoos (including Winnie the Pooh at London Zoo ) and even a naval zoo existed, at Whale Island, this was a little uninspiring as a regular play or garden scenario.  http://www.europeana.eu/portal/en/record/2024904/photography_ProvidedCHO_TopFoto_co_uk_EU044495.html

Evn today, Edinburgh Zoo has a penguin called Nils Olaf  “commissioned” into the Norwegian Royal Guard and occasionally visited and paraded  by his fellow (human) comrades in their magnificent full dress uniform.

This was sort of true of British Zoos in wartime – there were  special rates for servicemen (and lady friends) in uniform, entertainments in WW1 for injured servicemen. I have 1939’propaganda’ press pictures of servicemen enjoying elephant rides at Belle Vue Zoo Manchester. In the first few weeks of being closed to the public on ARP grounds in September 1939, London Zoo made arrangements for servicemen to walk round for the animals to look at. ‘The Zoo’ also made their canteen over to the RAF as the big houses around became RAF Regent’s Park full of training aircrew.

Britain’s and other lead toy soldier manufacturers made plenty of civilians and farm workers in the more pacifist aftermath of WW1. Plastic manufacturers haven’t followed suit and painted railway figures in this 54mm /1:32 scale are often quite expensive.

Failing the mounting of a full scale military parade through your zoo, Wild West town etc. all day and everyday,  some normal civilians are useful for floor games, sandpit games or  wargames.

These  feature sets  came from a zoo gift shop with two zebra striped jeeps, some brilliant wooden watch towers and rope ways (of which more anon) , a couple of odd sized animals and these interesting modern civilians.

Something similar to the girl child in the photos has recently been repainted and reused in a Slinkachu type way on the front cover of an art photography book Micro Worlds about the recent group of artists / photographers playing with scale for satiric, unsettling or comic effect. An interesting book but one which contains some slightly disturbing dystopian or to some tasteless items from a range of photographers. 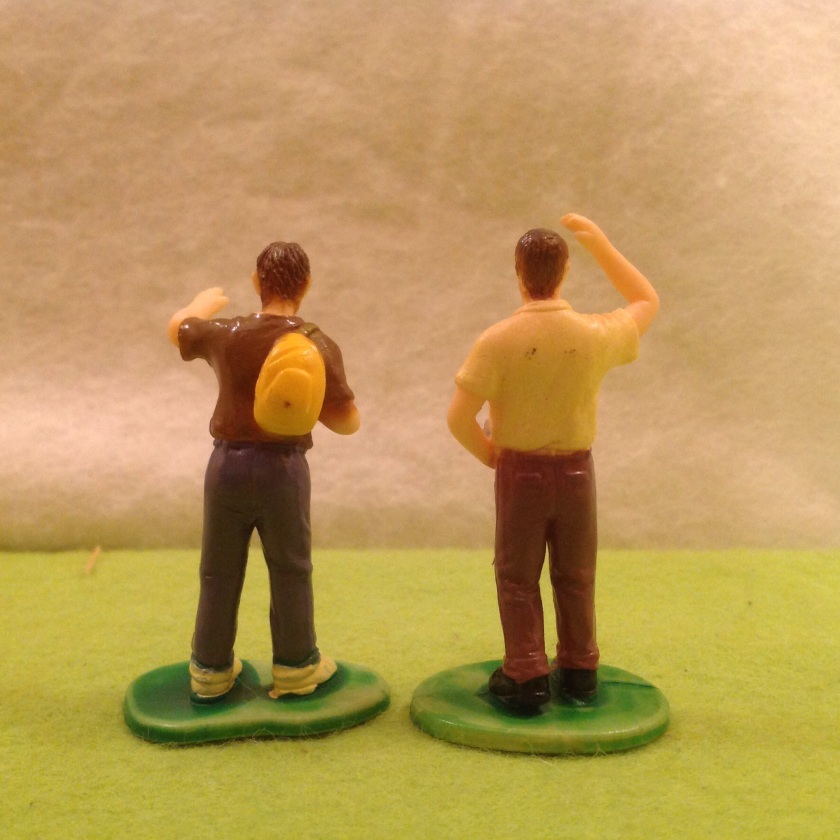 Police and firefighters are now available in poundstore tubes. Back in the 1980s there were Britain’s Deetail nurses, doctors and  construction workers, not forgetting the Britain’s farm workers from lead to Herald plastic and a modern farm worker range still around in toy shops today.

In future blogposts I will feature more civilian figures to be used for game scenarios from the Chinese online set to the useful USA manufactured  Toob “heritage” plastic figures roughly in 54mm, also purchased online.

These are Toob figures from their Jamestown Pioneer set. They are a blacksmith and a woodsman, both handy civilian figures in 16th / 17th century dress that could be repainted to suit later periods such as the Wild West.

A wide range of civilian figures are featured in these Toob figures sets, though they are hardly pound store cheap and arrive prepainted. I ordered these online as some useful civilian figures to enrich games and displays.

I will feature further figures in a Toob figure review in future blog posts. 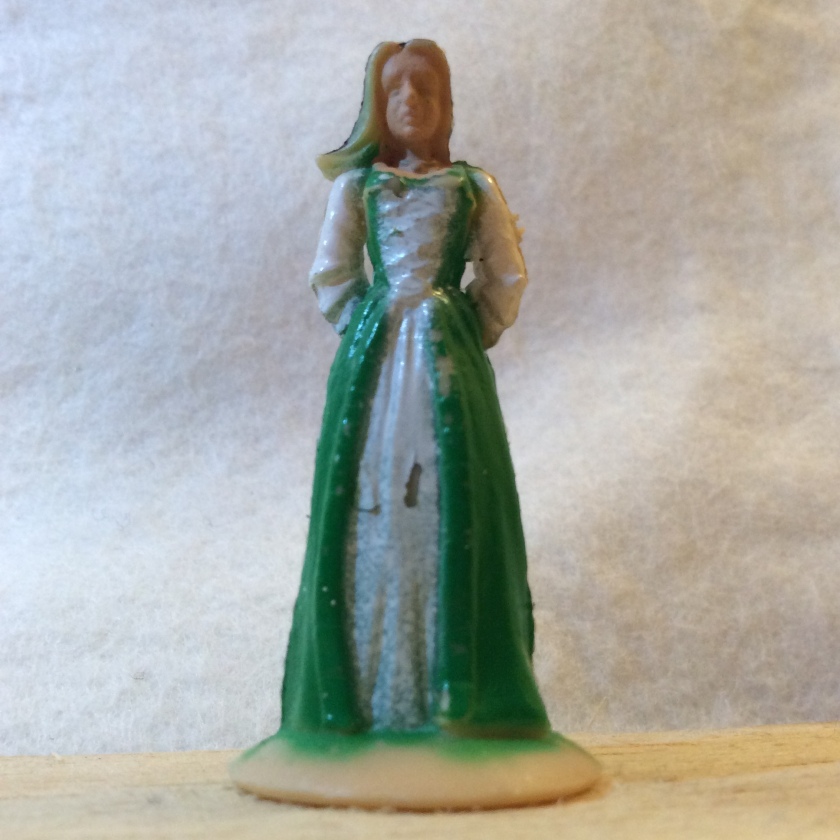 This scary looking female comes in a set of cheap painted pirates often found in toy stores and seaside shops.

She comes with some interesting protection tucked away in her hands behind her! 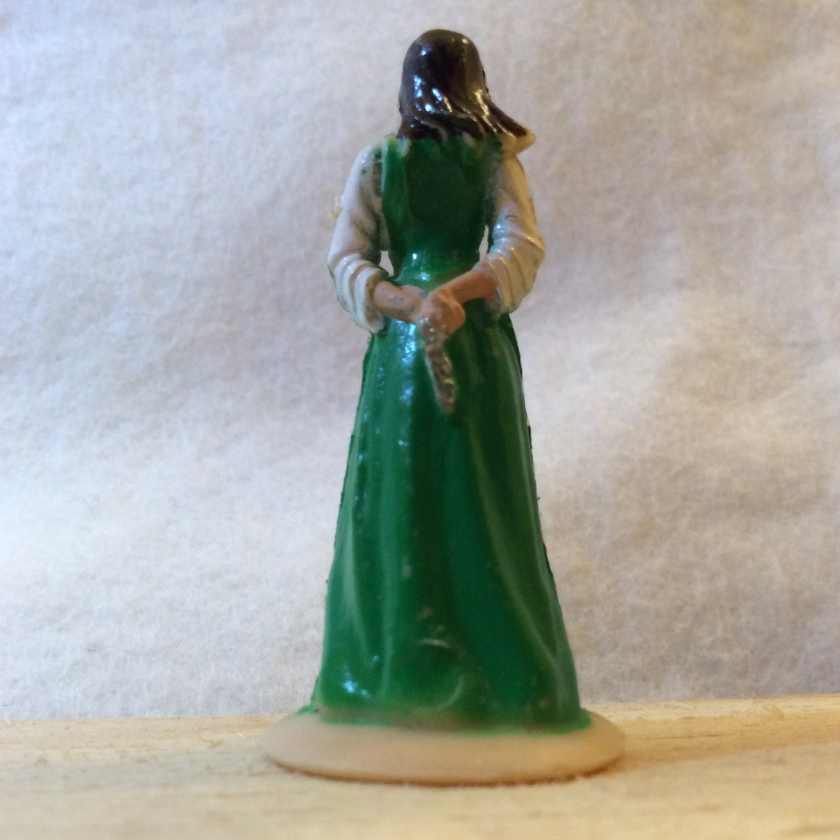 This female figure could be repainted in a variety of ways to suit different periods from  17th Century pirates to Wild West and even Gothic, fantasy, vampires, steampunk and Sci-Fi scenarios.

Civilian or female figures are often hard to find in pound store plastics.

I have repainted the base colour on her face as she had some strange gothic black eye paint in her factory original paint state.