Readers and fellow gamers shared their Rosemary Sutcliff stories in the comments on my recent blog post, that also received a welcome visit and comment from her godson and literary executor Anthony Lawton.

Today on her birthday I give her – an old lead cow or two. Why?

The reason will become clear if I share two short quotes from the early childhood chapters of her autobiography, for the period just after WW1. Her father was a naval officer. Her older sister Penelope died as a baby in the Spanish Flu pandemic.

“A few more years, and I was born. My father was at the Admiralty at the time, and commuting daily between Whitehall and East Chandon, which is how just before Christmas 1920 I came to be born in Surrey.”

A posting in Malta is memorably described and then her return to Britain. Writing in her 1983 autobiography, Sutcliff recalls the pleasure of lead toy figures almost 60 years ago :

“For a short while, weeks or months, ‘Home’ was a cottage we rented near Sevenoaks, and my father was again at the Admiralty and coming back from London each evening.”

“One evening he bought me the nucleus of what was to become a well stocked toy farm: two cows, one black-and-white lying down, one brown-and-white standing up, and a hen sitting on a nest full of yellow chicks. They were stout heavy little creatures of painted lead. Oh, the satisfying weight and density of the farm animals and toy soldiers of my youth, compared with the flimsy plastic variety with which the modern child has to be content, finely modelled but so light that they blow over if you breathe in their direction.”

“I have always been sorry for children born more than two hundred years ago, and therefore denied the pleasure of popping fuschia buds, and for children born too late to enjoy, except as family treasures and collector’s pieces, the feel of strength and balance and solidity of lead cows or Grenadiers that were a delight to the hand as well as the eye.”

As she grew up, she had an older family friend, Colonel Crookenden, colonel of the Senior Officers School at Sheerness, who:

“His hobby was making lead soldiers, and I soon had a sizeable private army, complete with despatch riders on motor-cycles and a stretcher party, to range alongside my toy farm on its green baize-covered board.”

I mentioned that I had kept aside a Sutcliff or two to read for her birthday week, although I realise from the bibliography how few of her books I have read.

One is The Capricorn Bracelet, a series of short stories spaced over three centuries and many generations of the same family from AD 61 to AD 383. The Capricorn bracelet is a linking literary motif, a Roman military Distinguished Conduct bracelet that travels down through members of the family.

Originally written by Sutcliff as some short stories for Radio Scotland, these scripts were redeveloped into short stories. Each short story or chapter feels like you have read a mini Eagle of The Ninth.

The chapter headings give an idea of the time spanned, the narrator or main character varying from legionaries and cavalrymen, officers and men through to British tribesmen:

and a handy timeline background chapter for these stories too.

This New York Times review of the book suggested it was “not Sutcliff at her best” which I certainly do not agree with.

I photographed the repair process of mending the lead cows ‘ legs and will feature this on a future post.

Looking at household scraps ready for discard or recycling, like many gamers, i often wonder what they can be turned into.

I deconstructed this used-up underarm deodorant into its parts and after a good soak to degrease them and remove any fragrance, started to prepare the shapely plastic body into a standing stone for larger figures.

Tip: I thought I might have to use a saw to separate the proposed Menhir section but the weak point is the roller ball, attack this with sharp points of sprue cutters and soon it will all be in pieces. Some of these pieces have gone in the spares box such as the cog or propellor looking thing.

I checked the Maya / Aztec / Inca standing stones but their Stele pillars were more four square. However looking online and on Pinterest at Menhirs across Europe, I spotted many examples that matched this shape.

Using a 54mm figure of one of my passing Armada Spaniards in the absence to hand of any Romans or Gauls, I checked the size / scale. Not too outlandish …

To make the Plastic more accepting of Acrylic paint, I used sandpaper to rough up its surface and that of a plastic lid base. I then applied black Acrylic as undercoat.

Stone Grey, Gunship Grey and Panzer Grey Revell Aquacolor Acrylic was then applied thickly or drybrushed to give the weathered look.

I considered briefly how to cut into the Menhir edges with some runes or ogham letters to make it an inscribed stone but didn’t do this in the end.

The final touch was “Much Flocking on the Henge” (can one menhir make a Henge, much as one swallow doesn’t make a summer?)

I found my Timpo Romans and a passing Viking doing his best Celtic / Gaulish impression – fine multiple plastic casting Timpo figures from my childhood. A handful of seasoned veteran warrior remain on either side. 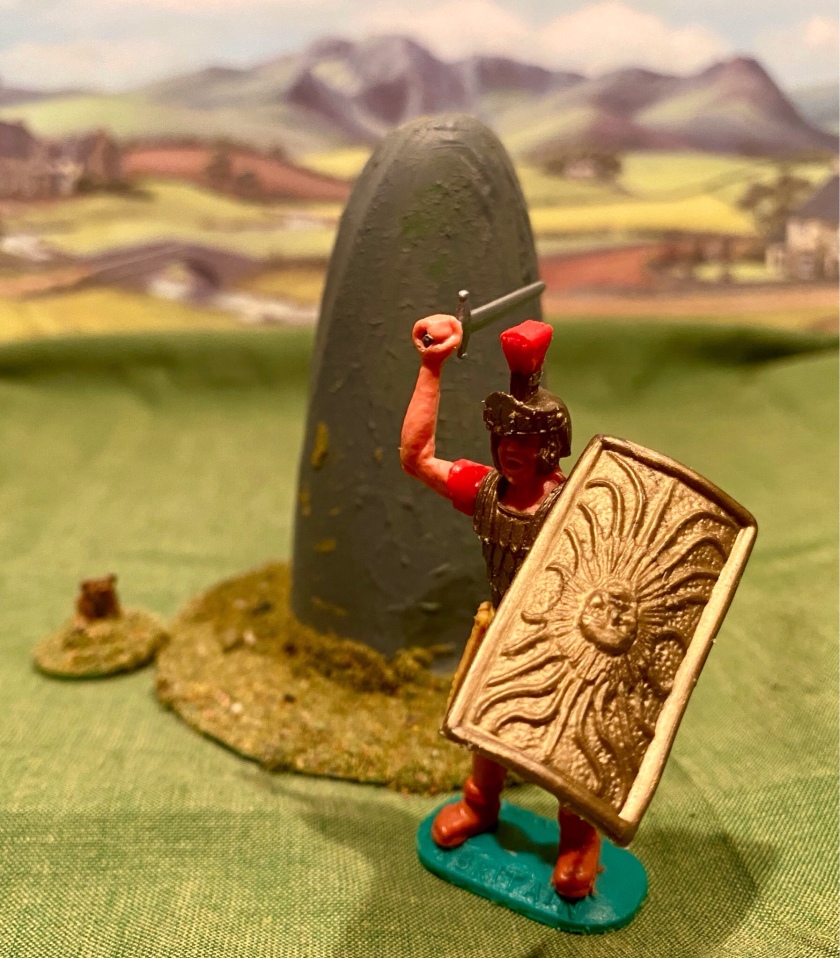 And to celebrate the greatest Menhir delivery service of all time … some required reading other than Rosemary Sutcliff’s historical fiction Roman books.

I was reminded of this by reading Alan Gruber’s Duchy of Tradgardland blog entry today about acquiring some Asterix and Roman figures from fellow blogger Tidders. Tidders (Allan Tidmarsh) is downscaling his impressive collection of 1:32 / 54mm Romans and Celts / Gauls shown in his Asterix inspired blog By Toutatis! The blog thankfully will remain even when much of the collection is dispersed.

Asterix is one influence on my ongoing interest in things Roman, along with the tiny Airfix figures and Roman Milecastle Fort, but the strongest emotional connection that I have with Roman Britain is through the imagination and inspired writing of Rosemary Sutcliff.

Although I have reread the first book The Eagle of The Ninth several times since then, I had read the other two long enough ago that I couldn’t remember much of the storyline. It was like reading and enjoying them anew. 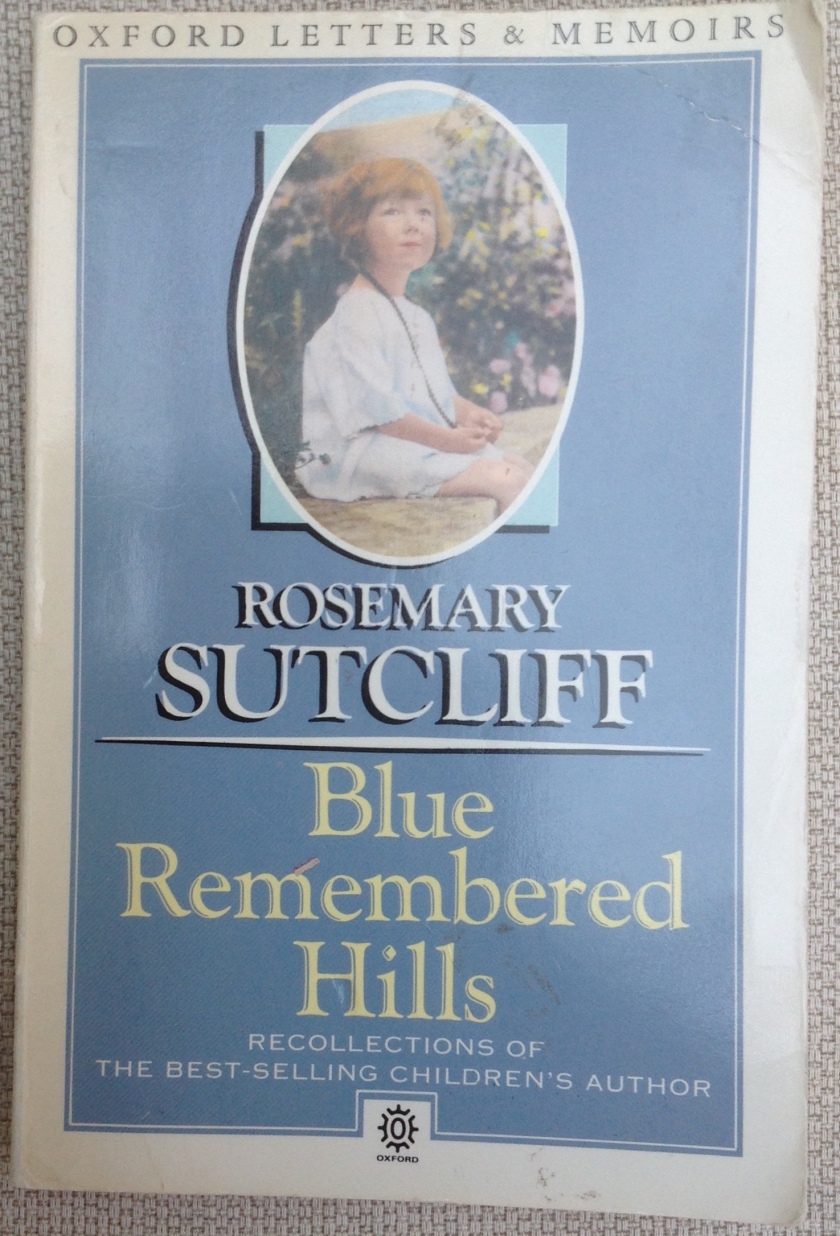 Her autobiography Blue Remembered Hills was published in paperback by Oxford University Press in 1984. I had not read this and knew very little about the author at the time of reading these books as a child. Maybe it was not mentioned in her author biography in the hardback and paperback versions I would have encountered then. I had no idea of the challenging life that she had, living with a progressively wasting illness called Still’s Disease.

Oddly, for a book about an increasingly frustratingly restricted life, my overall memory of this book which I read earlier this year is of sunshine and landscape. Maybe it was her observational skills as both an artist and writer that created such a strong sunny impression.

Looking through the Wikipedia entry of her published books and the website to 2018 and website to 2020 ongoing maintained by her godson and literary executor Anthony Lawton, I am surprised by how much that she wrote and also how much of it I cannot recall having read.

As well as the ongoing WordPress blog on Sutcliff, Anthony Lawton maintains an active Twitter account for Sutcliff’s life and works: https://mobile.twitter.com/rsutcliff

Sadly only a small amount of her work is currently in print for her centenary, seen at the Oxford University Press website https://global.oup.com/education/content/children/authors/rosemary-sutcliff/?region=uk

However, a fair amount of recent paperback copies can be found online including the one I will be reading for her centenary month, another Roman title called The Capricorn Bracelet (1973).

1. the storymaps with Roman place names such as in the Eagle of The Ninth

or the story map with Roman names in The Lantern Bearers

2. I also liked the historical note of what inspired each book such as The Silver Branch combined with mini map

Or in The Eagle of The Ninth, the discovery of the wingless Silchester Eagle, which is now on show in Reading Museum.

I have both of these features – historical note and place names – to look forward to in The Capricorn Bracelet, but sadly no map.

3. The sense of time passing, of generations and of places and objects linking families through generations

The story maps of the books, characters and places overlap in ways that make her Roman and post Roman landscapes more convincing.

In the case of The Capricorn Bracelet, the title names the object that connects the series of short stories (originally radio plays) that span AD 61 to the Roman Legions leaving Britain AD 383.

In the Eagle of The Ninth trilogy, it is a family dolphin signet ring and tattoo that transcends the generations. This seems to become the motif of Rosemary’s signature seen here and on the back of her autobiography.

The equivalent now would be a family story connected by an object stretching back into the 18th Century or forward into the 24th Century.

Update: Penguin appear to have some more Sutcliff titles in print

There are some great Roman sites to visit in Britain to get down to Roman floor level such as Roman Bath (good AV, models and living interpreters) but also small settlements such as Ambleside Roman Fort (English Heritage, free) and the beautifully preserved mosaic floors of the tiny family run Bignor Roman Villa in Sussex.

The equivalent Papo or  Schleich figure range are better paint finished, slightly more detailed and about one of these  would cost the same as five to eight or more of these £1 figures.

As all they had left of this range on the shelves in Poundland were mostly the Roman Testudo  Tortoise figures, a little cutting and reglueing of the arm may be needed. Pilum or Spear very fragile but they do have separate sword in a scabbard.

Obviously a little painting may be required but this is a much cheaper way of building up some big troops for garden gaming.

The challenge is who they are to fight against! I will have to keep an eye out for some suitably tribal figures in the sameness price range.  Even the gladiator has no opposition but there are plenty more poses of  Schleich gladiators at greater cost.