Inspired by Bartitsu Duelling,  I have been looking out for  suitable period figures to use in my quick solo card duelling game. This game is based  on Gerard De Gre’s “Lunge, Cut and Stop Thrust” rules, reprinted in Donald Featherstone, Solo Wargaming. 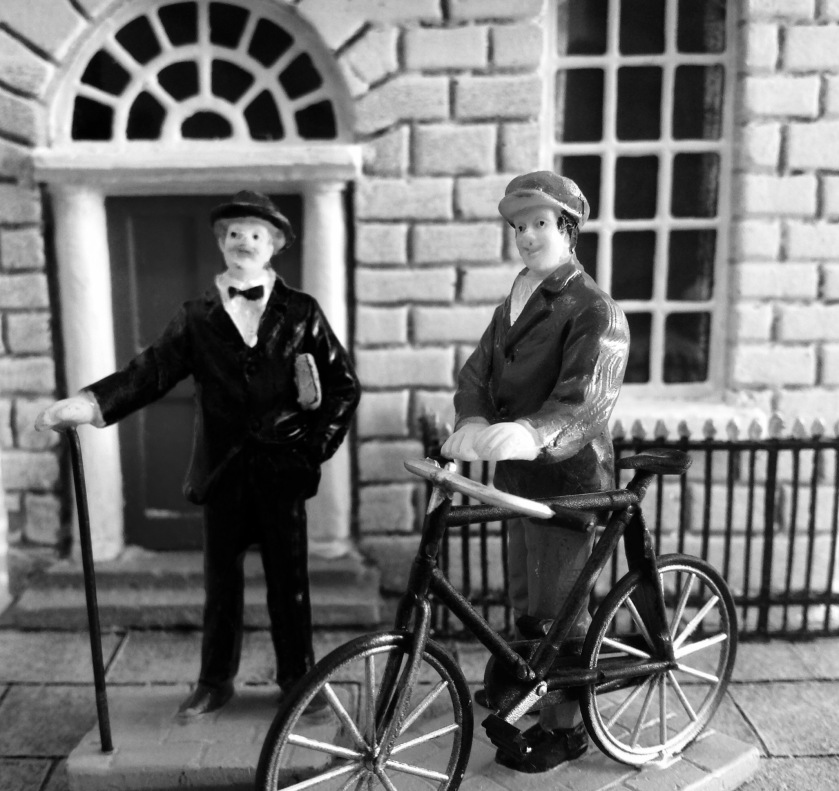 These Lemax  (badly) prepainted Christmas or Model village type  figures are not cheap at around £5 a pair but period civilian figures are fairly rare beasts  compared to toy soldiers. They get a little closer to the Bartitsu style stick fighting figures shown in the  montage below. 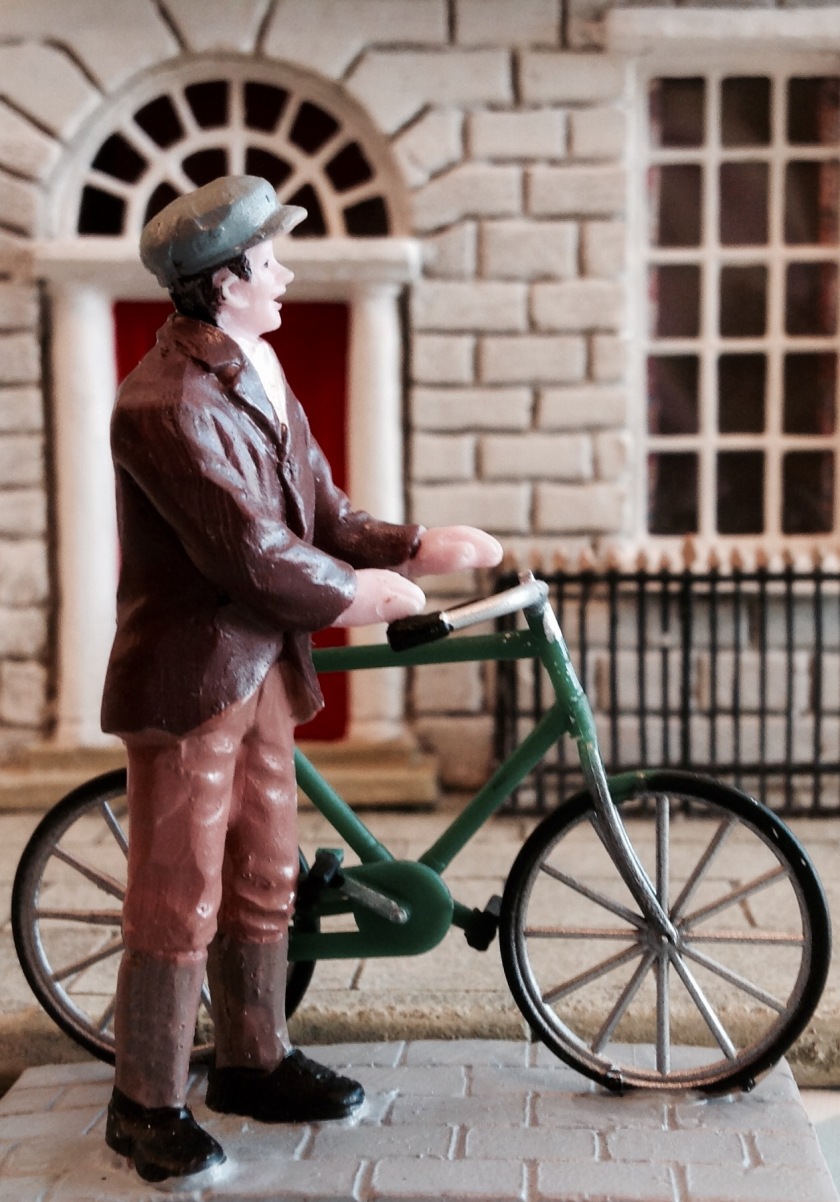 I like the cyclist figure that comes with one of the stick or cane wielding men. The Bartitsu website also features articles and comical video for gents and ladies on how to use your new fangled bicycle invention as a defence or attack weapon against Edwardian ruffians.

These figures sort of capture the Edwardian or VSF top hat street fighting feel of  Bartitsu.

One other pair of Lemax figures, staves in hand,  looked online like they would be a good pair to split up to make a duelling pair. These Lemax  Spelunkers or mountain climbers are such a fun set and so thickly based that I think I will keep them together and repaint them. There is always the garden rockery to explore!

With a rifle added they would make great mountain troops or guide with their water bottles and haversacks. Separating the resin figures from their bases or cutting the resin base in half would be a tricky and probably doomed option. They will stay together and sometimes explore the rockery in garden games. 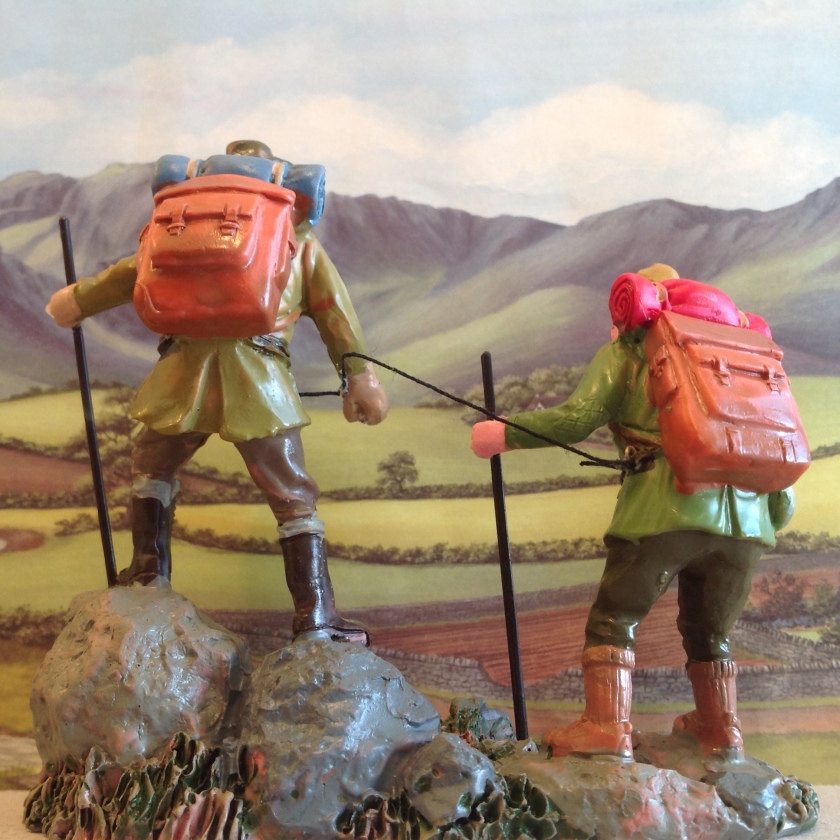 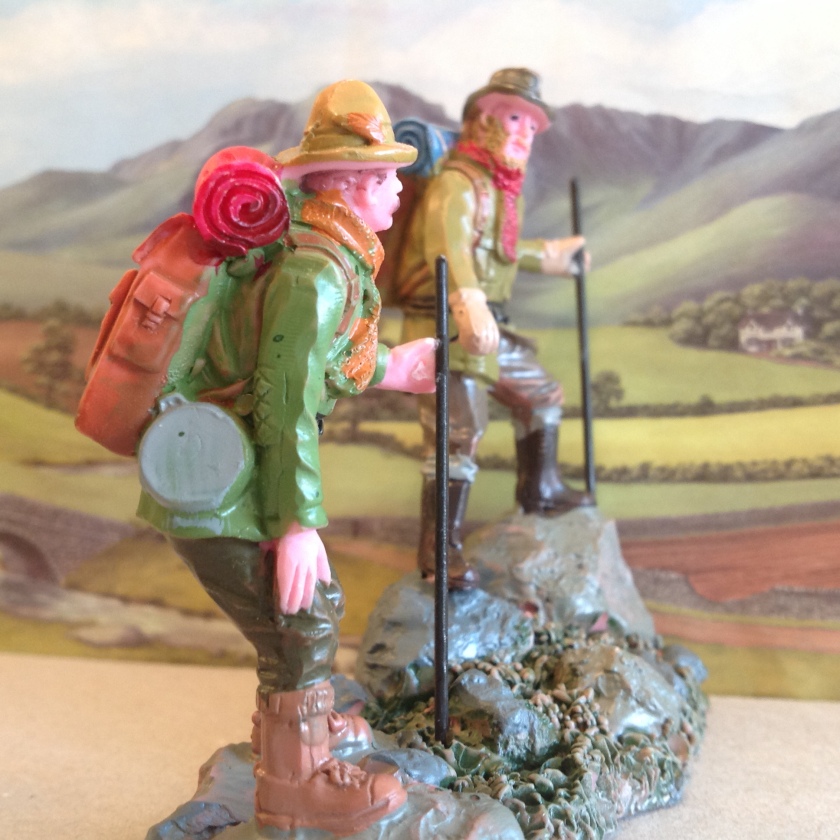 They remind me a bit of the more interestingly posed Airfix German Mountain Troops.

Sadly the Lemax figures are big 1:32 figures, more 64mm than 54mm, and on chunky resin bases as can be seen in comparison with this 54mm Britain’s lead farmer.

If you recognise this Ruffian on the left, he unfortunately took on a street sweeper and lost. A broom being good as a two handed duelling stick …

But isn’t this the Pound Store Plastic Warriors blog?

Bashed hollowcast lead figures and Resin Christmas figures are all very well. They belong more to my Man of TIN blog projects.  But what about duelling with cheap plastic / pirated figures?

If this post seems to have drifted from pound store plastic warriors for the moment, there are always some uses for of the “useless” pose figures that can be adapted for duelling such as these clubbing and bayoneting troops.

and several sites on bayonet fencing and stick drills

This interesting civil war history and re-enactor site has an interesting section on bayonet drill, full of the language of  sword fighting and duelling / fencing thrust parry and lunge but with a coarser edge (using the rifle butt etc).

It was not unknown from an early period for heavy pistols and muskets to be reversed and used as clubs, after the enemy got too close for you to reload.o

Add a bayonet as well as a pistol butt  or rifle butt and an infantryman or dragoon had an impressive close quarters duelling weapon that they were trained to use. I’m not sure how coordinated or choreographed this bayonet duelling would be in real life, but in the toy war / duelling card game it fits the balletic lunge and parry style of the  game.

Bayonet drill is possibly one reason for the large number of dramatic but odd stabbing, clubbing etc figures that especially plastic soldier manufacturers seemed to turn out in figure sets, in place of useful marching and firing soldiers.

And at last, an active use for those drum majors off duty … in a quiet London street near a barracks somewhere …

Until the local constabulary turns up and breaks it all up. A Truncheon will be drawn if needed. Move along there …

All these quick figure duels using Gerard De Gre’s Lunge, Cut and Stop Thrust rules have been great fun solo games in between other gaming projects.

Next step is to add more moves into the pack of card moves  and “combat resolution table”.

Blogposted by Mark, Man of TIN.

2 thoughts on “Bartitsu and Bayonet Duelling”