Side view of the 2 cm green and grey 203 figures

This recent gift was (I think) bought last year from a seaside gift shop, part of the Combat Mission branding that we have featured elsewhere on this Pound Store Plastic Warriors site. However it can be found online for around £5 including delivery.

They have muted details but are not too distorted with minimal flash and have good bases. Even without vehicles, these 200 odd figures would be 1p to 2.5p each.

Being a cheaper play set, both sides of German / Grey and American / Green troops use the same moulds / figures. Ditto the jeeps and tanks. They all make good enough generic WW2 / modern infantry and vehicles.

Green troops have a radar or searchlight jeep, along with a small multiple rocket launcher. 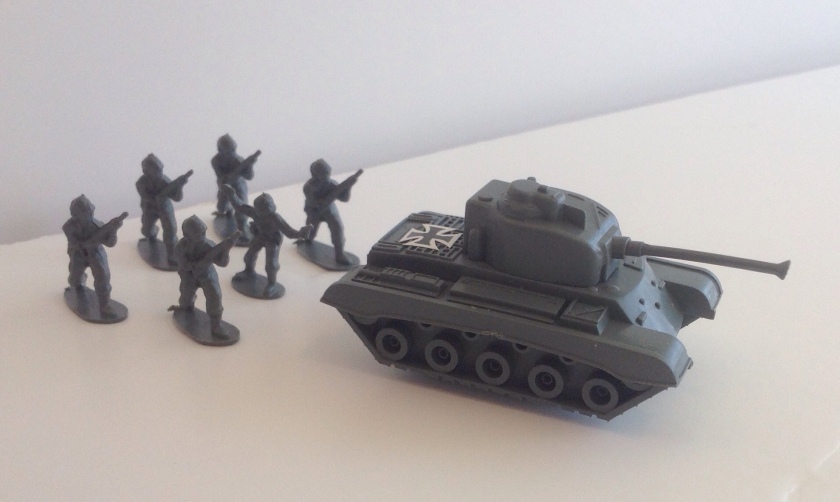 If you don’t want to use the flag-post mound for its intended purpose, it can become infantry cover.

Overall this is good (play) value, as you can buy these playsets online all in for about £5 and free delivery.

Given that you have 203 figures in my set, approximately four boxes of Airfix figures, this would cost you in the shops about £20. Add in the hard plastic tanks and jeeps similar to the Airfix ones from the 1970s, this £5 set proves good value to the young and not so young gamer.

Quantity has a Quality all of its own, someone once said. “The phrase has been popular in the US defense community since the 1980s, sometimes acknowledging it as a US coinage, but often misattributing it to Clausewitz, Lenin, Stalin, and Brezhnev, but mostly to Stalin.” http://klangable.com/blog/quantity-has-a-quality-all-its-own/.

One of the typical play set minus points for some is the weird period mix and oddities of scale. These are generic WW2 and postwar figures next to a WW2 type tank and WW2 or postwar type jeeps but the modern odd one out is the secret Stealth type jet.

If you are role-playing a pound store WW2 skirmish rerun of Germany versus Britain and America, this could be a prototype or experimental Me262 type variant jet fighter.

If you are role-playing Green versus Grey in your ImagiNations scenario, again it could be a top secret stealth fighter etc.

The German / American branding is fairly fluid, depending on which bag you get. Other versions of the same figures and vehicles can be found online with desert tan and green troops, marked by flags as Americans and British!

It is the sort of playset that I would have been happy to have bought with my pocket money as a child and even today as an adult gamer, I could enjoy this for what it is.

I might rebase the figures. I might remove the stickers and even add a lick of flesh paint, maybe some brown or black paint on boots and weapons. But I will enjoy them for what they are.

8 thoughts on “The Joy of Pound Store Play Sets …”